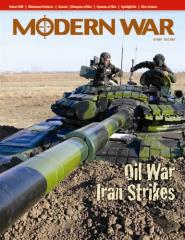 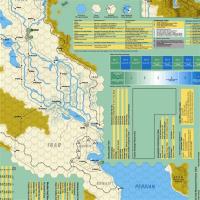 This near-future what-if war game, designed by Ty Bomba, is an update and expansion of the classic old-SPI Oil War game from the mid-1970s. It examines an Iranian strategic alternative that’s becoming increasingly plausible in light of the drawdown of US military strength in the Middle East. That is, just as it did in Cold War Europe, the prospect of both sides having nuclear weapons in this “zone of confrontation” may work to create a deterrent umbrella that, at least for some time, could allow for a potentially decisive conventional war to go on underneath the threat of “mutually assured destruction.”

Oil War: Iran Strikes (OW) is a low-intermediate complexity design set in a time frame of the near future – 2013 through 2017 – in which the Iranians may indeed have developed some kind of nuclear capability. At that same time, with the “War on Terror” having likely slithered to an indecisive end by then, and the US therefore likely fallen back into another post-Vietnam-type “neo-isolationist” phase, the possibility for a blitz-style Iranian conventional military victory – aimed at establishing and certifying Tehran as the hegemon of the Gulf region – moves to the fore.

OW examines the strategic and operational possibilities and parameters inherent in the opening Iranian offensive of such a war. There are no rules for the use of atomic bombs or other weapons of mass destruction (WMD). The situation is on such a hair trigger in regard to that aspect of things, if one such weapon were to go off, many more detonations would be certain to follow. The idea is for Iran to gain a victory without resorting to “game changing” WMD.

Each hex on the map equals 18 miles (30 km) from side to opposite side, and its coverage stretches from Turkey in the north to the UAE in the south, and from the Iranian border and Persian Gulf on the east to Baghdad and Riyadh on the west. Each game turn represents three days, with a full match covering the first month of the war.

Units of maneuver are corps, divisions, brigades, and US brigade combat teams (BCT) of various kinds, each containing from about 5,000 to 15,000 men and/or 50 to 400 armored fighting vehicles or helicopters. The most up-to-date data available have been used to establish each participant country’s detailed order or battle, including the Iranian regular army (Artesh), Basij (martyr force) and Revolutionary Guards, along with the ground forces of Iraq (loyalist and insurgent militias and regulars, Kurds, and the “elite” Quick Reaction Force). There are also the armies of Kuwait, Saudi Arabia, Qatar, Bahrain, the UAE, Syria, Turkey and, of course, the US.

The game includes one map (22x34”) and 228 counters.
» Browse other products by Decision Games
Home Back to Results