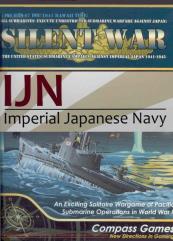 Two great games together and updated in this Deluxe 2nd Edition!

Silent War is a solitaire simulation of the United States' Navy submarine war against Imperial Japan in World War Two. You serve as Commander of Submarines, US Pacific Fleet (ComSubPac). Your mission is to deploy your boats with maximum effect to destroy Japanese shipping, while limiting your own submarine losses.

Featured scenarios cover actions ranging from famous short single sub patrols, through small campaigns of about a year of the war, ending with the grand campaign covering the entire Pacific War. The game map breaks the Pacific into Operations Areas that subs move through as they patrol in search of Japanese shipping.

Special rules feature historical events that occurred during the war, ULTRA intelligence information reports, torpedo quality improvements, wolfpack capabilities, Super-Skippers, and many others. Every US sub deployed in the Pacific is represented with its very own counter. All subs have been meticulously and accurately drawn, and shown from their side in full-color.

Bring added realism to your submarine campaign with IJN, Imperial Japanese Navy, originally released as the first expansion pack for Compass Games’ award winning Silent War. Every Japanese warship down through the large destroyer escorts and the major auxiliary cargo ships and tankers are provided in two full countersheets with 336 new playing pieces for the game and rules to integrate them seamlessly into the game. IJN, Imperial Japanese Navy also brings new rules to Silent War such as loners, crash dive, and targeting escorts, rules introduced in the follow on game, Steel Wolves.

This new edition features a mounted game board, consolidated rule book with all changes and improvements incorporated, a number of revised tables, additional scenarios not in the original game, and all the additional playing pieces that were added in the Steel Wolves game. Silent War and IJN, Deluxe Edition is the definitive game on the United States Submarine Campaign against Imperial Japan.