D-Day Kit-Bag, The - The Ultimate Guide to the Allied Assault on Europe 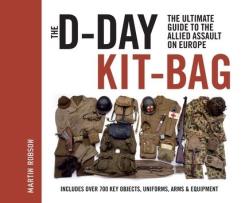 Sold Out
Last Stocked on 3/9/2020
Have one for Sale or Trade?
D-Day Kit-Bag, The - The Ultimate Guide to the Allied Assault on Europe
by Bloomsbury
Category: Historical Books
Genre: Book - Reference - Historical

D-Day, or OVERLORD (to give the Allied invasion of Normandy its codename) was the largest amphibious invasion in history. The plan called for an assault upon Hitler's Atlantic Wall to be conducted by 160,000 men, convoyed and landed by an invasion flotilla of over 5,000 ships to land several waves of troops upon five Normandy beaches: Utah, Omaha, Gold, Juno and Sword. 'The battle belonged that morning to the thin, wet line of khaki that dragged itself ashore on the channel coast of France', General Omar M. Bradley would later state. On D-Day itself 175,000 men, 3,000 guns, 15,000 tanks and 15,000 other vehicles were landed in Normandy by parachute, glider or across the beaches. Once established and with beachheads linked up, allied forces were faced with fighting in the dense, claustrophobic Normandy bocage, and it took six weeks of brutal additional fighting for the allies to break out of Normandy.

In the 70th anniversary year of the D-Day landings, this book tells this fascinating story not only through stunning documentary photography but also through over 200 key objects, selected for their importance to the outcome and experience of Operation OVERLORD and often arranged as the complete D-Day kit of many of the participants.
Key artefacts include uniforms and personal mementoes of Generals Eisenhower, Montgomery, Patton, Bradley and Cota; the blueprints of the Mulberry harbors; personal mementoes of the US Rangers on Omaha Beach and British Airborne troops at Pegasus Bridge; and uniforms and equipment of every major combatant army, including rare German Army and Waffen SS material from the Normandy battlefields.

The scope is international, covering USA, UK, Canadian, Polish, Free French and the French resistance along with other nations who took part including the Axis side. The book covers objects that had an influence at political, strategic, operational and tactical levels along with key objects which humanize such a vast undertaking such as K-rations and cigarettes.
» Browse other products by Bloomsbury
Home Back to Results