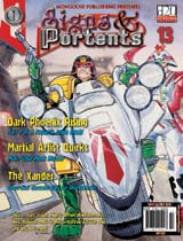 Issue 13 of Signs & Portents is here and it’s just getting better and better. With Mongoose’s range of games getting ever wider, so the range of articles in S&P broadens as well. Don’t worry, though. All your old favorites are there as well!

Tales From Mongoose Hall – It’s back, with more mayhem and carnage unleashed on an unsuspecting fantasy world by the Mongoose crew. This month Matthew creates an interesting new character to replace the late, lamented Agamar.

Martial Artists’ Quirks – We have a special feature on Quintessential Monk 2, looking at the martial side of the monk’s existence. Now you can make your monk a Coiled Cobra, a Defensive Savant or just Enormously Fat. Just don’t mention the Eunuch…

Tools of the Trade – A few new magical items to tickle your fancy. Try your hand with the Ghost Glove or the Curious Quill, although not necessarily at the same time. If that doesn’t appeal, listen in on conversations with the Whispering Shell, although you may hear things you wish you hadn’t.

Barbarian Fire Teams – Mighty Armies meets Spartacus as we get into our first gaming figure conversions, courtesy of Nathan Webb. Burn your way to victory with your Barbarian army, or flee in the face of these burning logs. Who knows, maybe this theme of movie weapons will catch on?

How It All Began – Part 3 of Gary Gygax’s exclusive look back on the foundation of roleplaying. Any serious student of roleplaying will be fascinated to read what the hobby’s godfather has to reveal about how the hobby began.

Three Sides of the Coin – More great new exclusive rules for Conan the Roleplaying Game, focusing on codes of honor for nobles, mercenaries and thieves, plus two Prestige Classes, the Poitainian Knight and the Gunderland Mercenary.

The Xander – Loads of you have been writing in asking for a new jack-of-all-trades character class for OGL CyberNet. Not wishing to disappoint, new writer Neil Striker provides all you need.

Gaming Symposium: Coins of the World – Money, money, money…let’s face it, apart from XP that’s what most of us play for. But have you really thought about the stuff? Of course you haven’t. You just spend it on magic gear, right? Gaming Symposium is the place to get you thinking right, so read on and expand your mind.

Going Underground – New York – Part 3 of our series about the Mega-City One Undercity for Judge Dredd takes us to the remnants of the Big Apple, only now it’s really full of maggots…

Halfling Caravan Ship – Halflings at sea, sailing in ships towed by strange creatures? What were we thinking?

Dark Phoenix Rising, part 1 – The first of a fantastic two part adventure for Judge Dredd. Did I say ‘adventure’? More like mini-campaign actually. This is a real treat for Dredd fans, with everything from evil doctors, narcotics and monstrous creatures. Time to get those mid level judges out of mothballs and really put them through their paces, or just generate up a new 10th level team and see if they can work out the mystery of flight LV-400.

All this plus regulars like Jonny Nexus and Inside the Chainmail Bra, along with Design and Conquer, the real story of how things work out at Mongoose Hall.
» Browse other products by Mongoose Publishing
Home Back to Results