All Products from MGM

Metro-Goldwyn-Mayer Inc. is a leading entertainment company focused on the production and distribution of film and television content globally. The company owns one of the world’s deepest libraries of premium film and television content. In addition, MGM has investments in domestic and international television channels, including MGM-branded channels. MGM and its legendary roaring lion logo was formed in April 1924, by theater magnate Marcus Lowe, who orchestrated the merger of Metro Pictures Corp., Goldwyn Pictures and Louis B. Mayer Productions. With visionary Louis B. Mayer and production genius Irving Thalberg at the helm, Metro-Goldwyn-Mayer was a powerhouse of prolific artistry and filmmaking expertise that the studio famously said attracted "more stars than are in the heavens." During a golden three decades from 1924 to 1954, the Culver City-based studio dominated the movie business, creating a Best Picture nominee every year for two straight decades. One of the more memorable years at the Academy Awards was in 1939 when MGM's Gone With the Wind and MGM's The Wizard of Oz were both nominated for Best Picture. Gone With the Wind took home Best Picture that year, along with 8 other Oscars. The Wizard of Oz secured two Oscars. Hattie McDaniel Won for Best Actress in a Supporting Role, and became the first African American to be nominated for and win an Oscar. United Artists was established on July 15, 1919 by Charlie Chaplin, Mary Pickford, Douglas Fairbanks and D.W. Griffith and was best known as "the company built by the stars." The budding company quickly left an indelible mark on Hollywood, revolutionizing the motion-picture business by promising creative freedom to actors and filmmakers, while offering the filmmakers a share of the film's profits. UA's Midnight Cowboy, released in 1969 starring Dustin Hoffman and Jon Voight, was the first X-Rated film to be nominated and win an Academy Award. It won 3 Oscars, including Best Picture. It was changed to an R-rating in 1971. United Artists later joined the MGM family in 1981, and thrived as member of the "lion's pride." MGM boasts more than 175 Academy Awards in its vast library. Among those are 14 Best Pictures. These films include; Rebecca, Hamlet, Marty, The Apartment, West Side Story, Tom Jones, In the Heat of the Night, Midnight Cowboy, Rocky, Annie Hall, Platoon, Rain Man, Dances With Wolves, The Silence of the Lambs. 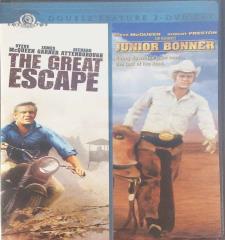 Product Details
Sold Out
Have one for Sale or Trade?
6 Products Found
Home Back to Results