All Products from Castle Rain Entertainment

Castle Rain Entertainment was firmly established by Michael Angelos P. in January, 2000. At the time, Michael was already a veteran of the retail, convention and publishing side of the comic industry for over twelve years. Michael Angelos’ desire to self-publish his own stories and channel them into all forms of media was the core idea behind Castle Rain Entertainment. In 2000, the Canadian company's first venture into comics was the re-release and completion of the sci-fi / fantasy series, “JESTERCROW”, which at the time, spawned a limited edition release of issue one in 1997. Originally planned as a 15-issue mini-series, it was split into separate story arcs; the first being a 3-issue mini-series, which featured fan-favorite artist’s and fellow Canadians, Stephen (JSA, Fairest) Sadowski, his first ever completed and credited book (Jestercrow #1); Janine (Star Wars, Elfquest) Johnston and Scott (22 Brides, Pitt Crew) Lee. Recently, Castle Rain launched a new Jestercrow TPB (The Hunt) in March 2006, which reprinted the mini-series along with a new story arc that consisted 30-new pages of art and story with art by up-and-coming artist Ryan Sergeant. It also included a never-before-seen 4-page short story. In 2002, with their second series, “JACK THE LANTERN”, Michael Angelos’ foray into dark fantasy / magic realism was born from his affinity of the fall / Halloween season. From on-set the series was envisioned as a massive trilogy with a few one-shots to fill in some background characterization of the series’ cast. The first part was released as six-issue mini-series that featured art by Scott Lee and the “Godfather of Horror”, Tim Vigil. The series was an instant hit with readers, and to this day, continues to build a strong cult following. In February 2006, Castle Rain released the one-shot, “JACK THE LANTERN: 1942” with a new art team of Jerry Beck (Something Wicked) and Tony Bledsoe (Frankenstein). The book was solicited in a standard format, and as well a Free Comic Book Day edition. The Jack: 1942 FCBD sold out with over 15,000 copies sold. Thousands more were also distributed among the military, libraries and numerous conventions. In October 2006, Jack the Lantern returned with a new three-issue story arc entitled: "GHOSTS" (Originally slated and promoted as a 6-issue mini-series) featuring art by Tim Vigil and Jerry Beck. The first issue was released with $1.25 price tag, and became the best-selling single issue book released by Castle Rain . A FCBD colored version soon followed and racked over 14,000 copies! After a one and half year hiatus, Jack: Ghosts # 2 was finally released in September 2008 with fan-favorite Stephen Sadowski returning to fill-in as guest penciler. Tim Vigil was hired to complete the final issue, which featured a 36-page special / finale. Continuing on the heels of "GHOSTS", "Jack the Lantern: War of the soul " a original 72-page graphuic novel finally saw the light in mid-2010. The book would feature art by the multi-talented writer / artist Mark Kidwell (Dark Kingdom , BUMP). It wasn't until the 10th anniversay of Jack the lantern (2013) that we saw a special reprinted version JACK # 0 that featured 12-redrawn pages by the talented Andrew Mangum (Evil Ernie.) It was followed in November 2014 with JACK:Salvation # 1, a new 2-issue mini-series again featuring art by Andrew Mangum with book 2 scheduled in mid-2015. 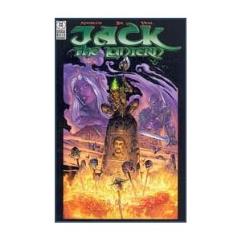