Book of the Light 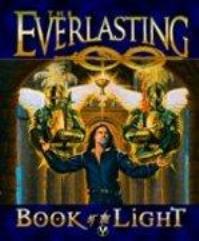 The eternal struggle still rages, the forces of light and darkness war over the fate of humankind. Join the light bringers as they fight Hell's war machine. Walk where angels fear to tread, travel the heavens and netherworlds, adventure in New Camelot, and fight for the survival . . . or domination . . . of Earth.

Become an angel, a true protector of humanity. You serve the divine as an angel of any one of the nine exalted orders, such as exusia, merkabah, aeons, and archangels. You can even be a half-angel. Walk secretly among mortals and protect them at all times from demons and the servants of darkness.

Become one of the daevas, the descendants of the mythic gods, or even those ancient gods themselves. You, like all daevas, are bound to fate as an heroic defender of humanity. Your greatest power is precognitive in nature, but all you see in terms of your own fate is a great uncertain darkness looming in the near future. Daevas belong to ancient households, such as the South American Huecuva, the Germanic Aesir, and the Celtic Tuatha de Danann. Choose your allegiance or your independence from them all. You are a master of the sword and a sworn enemy of the un-dead.

Become a quester, a modern day grail knight. After great searching, you came upon the Siege Perilous, found the Holy Grail inside, proved yourself worthy, and drank from it. This blessed communion granted you immortality, but that was just the start of your true quest. Now you serve the grail by protecting humanity from all sorts of supernatural threats.

The Book of the Light provides you with enemies to fight. Demons are fully a detailed antagonist race with their own fully developed history, mythology, biology, and so on. Learn how the first atomic tests cracked open one of the Seals of Solomon, spy on the dreaded realm of Pandemonium, and rescue stolen souls from the Netherworlds. The werewolves and other lycanthropes are also included. Study the ways of their brutal magick, watch their bloody pit fights, and hunt down the "vargr" werewolves that are moving to the cities, threatening humanity.
» Browse other products by Visionary Entertainment Studio
Home Back to Results