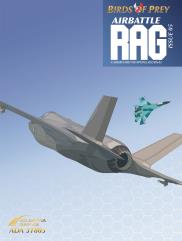 
NOTE: This product is a Pre-Order and is not currently available. The estimated release date is Q4 2020 (subject to change).
MAX 2 per customer. Orders containing preorder products will be held until all preorder products on the order have arrived in our warehouse.
#5 "Air Battle RAG"
by Ad Astra Games
Category: War Games
Sub Category: War Game Magazines
Genre: War Game - Modern (1960 A.D. to Present)
Magazine - War Gaming
Magazine - Aviation

Fly a new jet, wield a new missile, fly a new scenario. Airbattle RAG 5 is thefor everyone who enjoys the challenging world of jet dogfighting in Birds of Prey Air Combat in the Jet Age! New jets to fly, test your skills in new scenarios, and unleash new missiles on your opponents!

Experience the dawn of the jet age over the Korean peninsula in early jet-powered war machines, with the F-86A-5 versus the original MiG-15 sans suffixe. Or fly the hostile skies of tomorrow with the F-35C versus the Su-35S in a kinematic dance over the Formosa Strait. Airbattle RAG 5 spans over seventy years of combat jets between these two end-points, covering several jets in between, including Europe’s Tornado, the nuclear armed F-102A, and the iconic F-4D Phantom II. Teeth for these warplanes are provided by sixteen deadly new missile data cards.
BoP Convention 2018 scenarios from A Brief History of the U.S. Air Force each showcasean exemplar from five genera-tions of American fighting jets. Start over the Korean Peninsula, soaring over Vietnam and battling in the Middle East.

Nuklear Conflict, Toe to Toe… features the scenarios from BoP Convention 2019, with a sometimes theatrical look at conflicts of nuclear powers, both real and imagined.

Whether missile or gun, technological terror or manual early jet, historical or flight of fancy… Airbattle RAG 5 will carry your Birds of Prey fight to new heights!

» Browse other products by Ad Astra Games
Home Back to Results