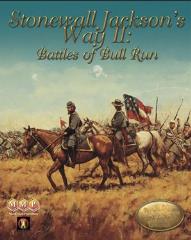 
NOTE: This product is a Pre-Order and is not currently available. The estimated release date is TBD 2020 (subject to change).
MAX 2 per customer. Orders containing preorder products will be held until all preorder products on the order have arrived in our warehouse.
Stonewall Jackson's Way II - Battles of Bull Run (2020 Edition)
by Multi-Man Publishing
Category: War Games
Sub Category: Popular War Games
Genre: War Game - American Civil War

These are the changes that have been made in this new reprint edition:

1. It will incorporate all known errata
2. It will include the current Standard Rules (Version 1.4)
3. The military units and leader counters have been re-done in the new style used in recent GCACW games such as Atlanta Is Ours.

Stonewall Jackson’s Way II: Battles of Bull Run is the 9th game in the award-winning Great Campaigns of the American Civil War (GCACW) series. This game is actually two complete modules in one: it includes a complete revision and augmentation of Stonewall Jackson's Way (SJW; the first game in the series), and an entire new module covering the First Bull Run Campaign, called All Green Alike (AGA).
The two maps included are newly painted by original map artist Charlie Kibler and include new historical and terrain details (to bring them up to the standards of the latest games in the GCACW series). The counters have also been updated to the new look established by Nicolas Eskubi for our latest title Battle Above the Clouds (Take a look!).

Stonewall Jackson’s Way II: Battles of Bull Run uses the same GCACW Standard Basic Game Rules that were first published in MMP's Skirmisher magazine and Grant Takes Command. The Advanced Game rule sets are also standardized so players will be able to move quickly from one campaign to the other.

» Browse other products by Multi-Man Publishing
Home Back to Results