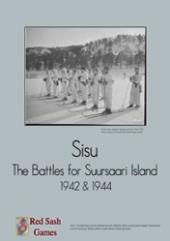 
NOTE: This product is a Pre-Order and is not currently available. The estimated release date is Q1 2021 (subject to change).
MAX 2 per customer. Orders containing preorder products will be held until all preorder products on the order have arrived in our warehouse.
Sisu - Battles for Suursaari Island 1942 & 1944
by Red Sash Games
Category: War Games
Genre: War Game - World War II

Suursaari, also known as Högland, Gogland, or ‘the Great Island’, is a large island in the Gulf of Finland. In 1942 and again in 1944 it was the focal point of a battle. The island is centrally located, perfect for dominating sea lanes leading to Leningrad or those crossing between Finland and Estonia. Float planes, or ski planes in winter, could use it as a base; strings of minefields could be monitored from it; coastal guns emplaced on it could engage passing ships. Immediately before World War II the island belonged to the Finns. It was a rustic vacation destination, complete with casino. The Russians acquired the island without a fight during the Winter War of 1939/40. In the winter of 1942, the Finns took it back from the Russians. In September 1944 the Germans tried and failed to take it from the Finns. This game comprises two scenarios covering these battles, using a common set of rules.

Scale is 300 meters across a given hex. Contour lines are 20 meter intervals. Since the 1942 battle took place in winter and the 1944 battle took place in summer, each scenario uses its own map. The military units are sections (squads), platoons, and companies. Other counters represent batteries of artillery and mortars, naval craft, individual commanders, and bunkers. Each player’s military forces must manoeuvre across the game board, attacking the opposing force with direct and indirect fire, airstrikes, naval gunnery, and fighting hand-to-hand. One player is the Defender and the other is the Attacker. The Attacker must achieve his objectives before time runs out. The longer the game goes on, the more objectives he must achieve to win. Turns are one hour. Special rules include snow storms, the Finns attacking across the ice in winter, German naval landings using barges and assault boats, naval gunfire by flak barges and a destroyer squadron, airstrikes, variable visibility due to terrain, weather, and time of day, antitank guns that can fire HE in an indirect role, and much more.

In the 1942 scenario the Finns attack across the ice in a blinding snowstorm against a reinforced Soviet battalion of half-frozen men, some of whom nevertheless resisted for 3 days. In the 1944 scenario the Germans fail in their attempt to bluff the Finns into handing over the island peacefully, land a motley force including worn-out infantry, coastal artillery personnel, 88mm flak guns with no ammuntion, and 580 men of Marine-Artillerie-Abteilug 531. The 531st was no sedentary coastal garrison, but a special commando unit whose men took part in the very first battle of the war, the assault on the Westerplatte at Danzig on 1 September 1939. The Finns defeat them all, just in time to hand the island over to the Soviets as part of the Armistice agreement.

» Browse other products by Red Sash Games
Home Back to Results