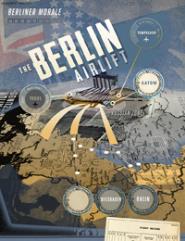 
NOTE: This product is a Pre-Order and is not currently available. The estimated release date is TBD 2020 (subject to change).
MAX 2 per customer. Orders containing preorder products will be held until all preorder products on the order have arrived in our warehouse.
Berlin Airlift, The - 24 June, 1948 - 12 May, 1949
by Legion Wargames
Category: War Games
Genre: War Game - 1900 to 1960 A.D. 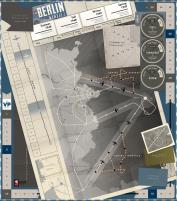 WWII had ended and the victorious nations; England, France, the United States and the Soviet Union divided Germany into four protectorate zones. Berlin was divvied up in like fashion. At the time, Russia commanded 30.000 soldiers in East Berlin and another 200,000 in the immediate region along with 4000 combat aircraft. In comparison, the Allies had only 1600 troops and fewer than 400 combat aircraft in the area. Russia’s allies had pared down their forces sending most units home to be disbanded. Stalin’s intention, from the moment the war turned in his favor, had been to seize all of Germany as a communist satellite, he saw his chance ... and he acted.

In April of 1948 soviet forces halted the supply of Berlin in the British zone then went on to block land routes in the American zone. This was easy to do since Berlin itself lay deep in the Russian zone. Two million civilians dependent on allied supply watched delivery slow to a trickle. Requiring a daily minimum of 5000 tons of food, fuel, and other necessities, Berliners began dipping into their reserves. American officials estimated they would run out of fuel in 45 days but would run out of food long before that.

The Allies faced a difficult decision. Abandoning the city would be a huge loss of face that could lead to the eventual loss of all of Germany to the communist bloc. On the other hand, with all land routes into Berlin cut the city could only be supplied by air, and was such a thing even possible? The Soviets didn’t think so. When the blockade commenced, Americans were only capable of delivering 300 tons of supply a day. Together with the British who could manage 400 daily tons. Officials admitted the tonnage still fell woefully short.

Supplying a major city by air for an indefinite amount of time? Nothing approaching it had ever been attempted. Despite the overwhelming odds, the Allies determined to give it a go. Veteran pilots and aircrews were recalled as disbanded cargo units were refitted and flown back to Europe. The effort was massive … no, it was beyond massive, nevertheless, Stalin was certain the operation would fail. His determined opponents proved him wrong. This Herculean effort is remembered as the West’s most selfless accomplishment.

Over the course of 12 months the airlift provided 2,225,510 tons of cargo for the city’s survival. At one point an airlift plane was lifting off every four minutes. In the end, more supply was provided to Berlin by air than could have been provided by rail. The Soviets did not stand passively by. There were 726 recorded instances of Soviet harassment involving everything from aerial buzzing, and ground fire to rockets, chemicals, smoke and balloons. In the course of the airlift 25 aircraft were lost, costing the lives of over 100 American, British and German personnel. And during the course of the airlift, many curious and heartwarming incidents enhanced the legend of their effort, including the candy bomber, the tour of Clarence the camel and the Easter Parade.

The Berlin Airlift is a historical treasure begging to be gamed and here we attempt to fit the bill. But a game is only as enjoyable as the conflict it portrays. Here the game pits players against each other in a race against the clock. Can players overcome accidents, miscommunication and soviet interference to achieve their goals? Who can deliver the most tonnage, and will it be enough for Berliners to survive? Naturally, Berlin Airlift is only representative of the larger enterprise, but in it, players will enjoy tense competition as they face all of the elements these brave allied aircrews faced when the war ended and - the blockade began.
» Browse other products by Legion Wargames
Home Back to Results