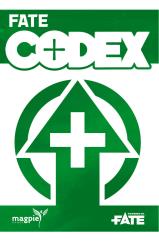 The Fate Codex was a mostly-monthly e-zine—funded through Patreon—that featured essays, systems, quick starts, and more for the Fate Core roleplaying system. Throughout 2016, over 700 backers funded six different issues of The Fate Codex; now we’ve brought all six of those issues together into this new anthology!

In addition to those six issues, this third anthology also features an additional 70 pages of new Fate Codex content, including three new quick start adventures and a plethora of new systems and articles that will make your Fate Core game a smashing success. We've brought together a fantastic group of writers to make this the best Fate Codex anthology we've ever published.

The art from the original issues—alongside new art for each new article—is carried over to this anthology as well, with works by such amazing artists as Robert Crum, Jenny Doleman, Alex Innocenti, Mike Mumah, Juan Ochoa, Bitmap M Prager, and Manuela Soriani.

Crack open this book, and you'll be swimming in fantastic Fate content: essays on how to write better aspects and run awesome adventures, quick starts featuring demonic motorcycle gangs and Roman senators, and systems pieces that add magical morality, inverted stunts, and new Gamemaster tricks to your arsenal.
» Browse other products by Magpie Games
Home Back to Results