Battle of Rhode Island, The 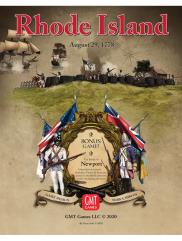 Condition: SW (MINT/New)
Our Price: $48.95
Retail Price: $59.00
You Save: $10.05
NOTE: This product is a Pre-Order and is not currently available. The estimated release date is June 2020 (subject to change).
MAX 2 per customer. Orders containing preorder products will be held until all preorder products on the order have arrived in our warehouse.

The Battle of Rhode Island is volume 9 in GMT’s Battles of the American Revolution series by designer Mark S. Miklos. The map board depicts the northern half of the island including the fortified American positions around Butt's Hill. There are 64 America, British and Hessian combat units and leaders giving the game a counter density comparable to Saratoga in the series. Although the tactical situation is somewhat straightforward; Americans retreating and British pursuing primarily up two main roads, the nuanced play and game texture is like that found in all the games of the BoAR series.

To ensure replay-ability, each player has a unique deck of 26 Opportunity Cards that either enhance his side or diminish the enemy. Cards are drawn at-start and occasionally throughout play as governed by the turn track. There are also mechanisms for card draw tied to accumulated casualties or the possession of terrain objectives. Players may also spend Momentum to purchase additional cards.

The cards themselves may provide DRMs, adjustments to Army Morale, leader replacements, tactics advantages, step losses or step recovery, and additional units introduced into play among other outcomes. There is also the possibility of the game being extended one game turn into "night" wherein the British launch a surprise night attack.

There are only a handful of Exclusive Rules to provide chrome including a squadron of British warships which may conduct off-shore bombardment. Players familiar with the core game system will be off and running in no time.

As a bonus, volume 9 will include a second scenario; The Battle of Newport. This hypothetical scenario features a second map board depicting the southern half of the island, the city of Newport and the British defensive works that surrounded it as well as the American siege lines. The French army is presumed to have stayed on the island to cooperate in a direct assault upon the town. It will make for a fascinating "what-if" study of the first attempt at cooperation in the war by Franco-American forces.

**Bonus: GMT is going to include a double-sided UNMOUNTED map in the game as a bonus - for those who prefer that type of map.
» Browse other products by GMT Games
Home Back to Results