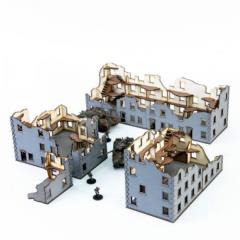 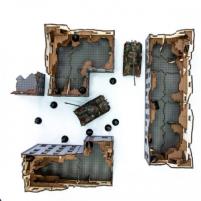 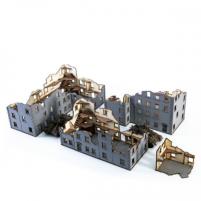 The Battle of Stalingrad would be one of the largest and bloodiest battles of the 2nd World War and is, by some accounts, also the turning point for the defeat of Nazi Germany. It lasted from 23rd August 1942 until 2nd February 1943 and consumed 1.8 million soldiers (killed, captured or wounded) of the Soviet Union, Germany and the Axis allies combined.

The battle was fought as a deadly urban conflict with soldiers moving from building to building, under fire from enemy soldiers, artillery and aircraft. The initial German offensive was successful in pushing back the Soviet forces to the Volga River however, on the 19th November 1942 the Soviet Union launched a counter-offensive against Germany’s allies on the flanks. As they became overrun, the bulk of the German forces in the center were now cut off and surrounded.

What would follow now would be a bitter war of attrition as the German army could not get a relief force forwards to break them out, nor successfully supply their trapped soldiers by air, whilst the trapped forces themselves had been ordered not to surrender. The battle would continue for another two months, until the German forces had run out of ammunition and food supplies, at which point most of those who had survived, surrendered.

The kits are modular and can be put together in multiple different setups.

Miniatures are for scale purposes and are not included.

Supplied Pre-painted and Unassembled.
» Browse other products by 4Ground
Home Back to Results