Storming the Gap - The Expansion Pack 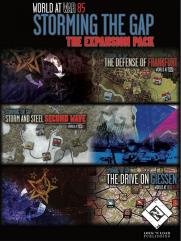 The Defense of Frankfurt Module:

The Soviet 79th Guards Tank Division charges hard towards its Fulda Gap campaign objective, Frankfurt, and the bridges there across the Main river. NATO forces have gathered to the defense of Frankfurt and are looking to stop the armored wave coming toward them.

Actual - and Geomorphic! - Maps of the Fulda Gap: The eight summer maps and eight winter maps, when configured in a specific pattern indicated in the two included scenarios display an actual, monster-sized fighting area northwest of Frankfurt, West Germany. The winter versions reflect that any line of sight benefits of obscuring crops of cultivated terrain are wilted and gone, presenting an entirely different battle arena.

The maps have ever so slight adjustments that also make them GEOMORPHIC, and so fully compatible with any other map in the World At War 85 series of games. Just line up the short edge or long edge of any of these maps to any other map in the series to create your own Forward Edge of the Battle Area.

If you want to fight with your World At War 85 forces on maps of a real section of the Fulda Gap, near Frankfurt West Germany, with a map adapted specifically for World At War 85 play, THIS expansion is for YOU.

Now you can fight using the platoons and batteries of the Czech Army as they charge into Southwest Germany heading for the Rhine and the French border. You will also find additional West German forces to try and slow or stop them! And you get two NATIONAL UNIT TABLES to go with these additional fighting forces, so you can design your own scenarios with them, or add them to units from the main game, Storming the Gap.

The three new maps will give you the experience of fighting your WaW85 forces in the close-in terrain of southwestern Germany, south, and east of Regensburg: an entirely different battlefield “feel.” You will fight at knife-fight ranges on maps of a real section of the hilly and heavily forested areas there, and adapted specifically for World At War 85 play.

The three SUMMER MAPS of the six maps herein, when configured in a specific pattern, display the actual fighting area surrounding Grafling, West Germany. The other six are WINTER VERSIONS, where any line of sight benefits of obscuring crops of cultivated terrain are gone and wilted, and so presents a whole different battle arena. The maps have ever so slight adjustments that also make them GEOMORPHIC, and so fully compatible with any other map in the World At War 85 series of games. Just line up the short edge or long edge of any of these maps to any other map in the series to create your own Forward Edge of the Battle Area.

SIX SCENARIOS ARE INCLUDED, depicting actions described in or implied by the narrative in the Novel Storm and Steel. You can fight West German Captain Mohr’s 1st company of the 244th Mountain Tank Battalion yourself and see if you can do better than in the novel!

The Drive On Giessen is a campaign game for World At War 85 Storming the Gap that allows the generation and play of a set of linked game scenarios depicting a Soviet division’s drive across West Germany against NATO forces.

The Operational map depicts an area roughly from Eisenach, in East Germany, to Giessen in West Germany. On the map are a series of locations, each location representing a game area of two maps. Links between locations represent road connection and will regulate how many game formations will be able to transit between boxes during each operational turn. Movement is simultaneous with and hidden from, your opponent. A unique, variable result Air Recon system gives you imperfect knowledge of your enemy's deployments, but if contact is made in a location, the boards are laid out and the generated scenario begins.

Requirements: This is NOT a complete game and requires World At War 85 Storming the Gap to play.
» Browse other products by Lock N Load Publishing
Home Back to Results