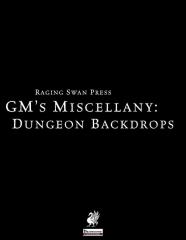 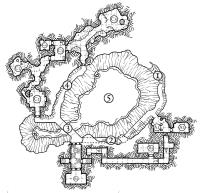 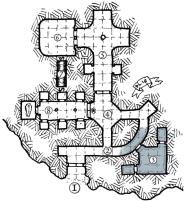 You are a GM, but you are busy. You want to write your own modules, but you just don’t have the time. And you don’t want to use commercial modules. You want to make your campaign your own. That’s where the Dungeon Backdrop line comes in! Each Dungeon Backdrop presents a fully fleshed out and lovingly detailed self-contained dungeon ready for you to use as you see fit. Stock the dungeon with your own monsters (and—perhaps—their treasure), decide their back story and you are good to go.

Every Dungeon Backdrop is carefully designed to be easily inserted into almost any fantasy campaign. Dungeon Backdrops: we describe the dungeon; you add the monsters (and the treasure).

Hidden deep in the forest stands the Crumbled Tower. Pressed close by hoary, gnarled trees and wreathed in moss and lichens the tower is a forlorn remnant of an earlier time. Once a wizard lived here, but now the tower is nothing more than a brooding ruin standing amid the forest’s gloom. Sometimes bandits lair within or adventurers wandering the surrounds use the ruin as a base. However, unknown to all, a hidden crypt yet lurks under the tower undisturbed these long ages past.

Hidden in the wild uplands beyond the Selka River, the sinkhole-mine of Delthur’s Folly is a byword among the locals for a fool’s errand doomed to fail. The only survivor of the fated expedition—driven mad by his ordeal and raving of “the water’s sibilant whispers”—died shortly after staggering into Dunstone a year or more after Delthur and his miners disappeared into the wilderness. And yet, every year adventurers cross the Selka in search of the mine—gold and silver are said to lie within. Some return empty-handed and some do not return at all. Local legend has it that something terrible dwells in the mine.

Hidden deep in the hills, Deszraul’s Hold has a sinister reputation. The medusa Dezraul claims the caves and evidence of her fell powers—a bewildering array of uncannily lifelike stone statues—stand about her gloomy domain. All that remains of adventurers daring to face the cave’s snake-headed mistress, the statues are a salutary warning on the dangers of facing a medusa in her lair. But does Deszraul still lair within? Has a band of savage, merciless bandits fallen under her sway? Only you can decide.

A keening gale tears across the Bitter Sea, parting the clouds above to unveil a turgid crimson moon. Ominous rumbling resounds from the churning waters below. The surface of the sea boils and bubbles like a witch’s cauldron—its waves foaming and swelling like a suppurating sore until a mass of jagged black rock erupts from the lightless depths. The Forlorn Isle has risen. Legend claims the small island holds the tomb of an ancient king whose crimes were so heinous his name was stricken from history. After his death, the weight of his evil deeds caused the isle to sink into the Bitter Sea.

But once every year, when the Blood Moon casts its baleful gaze upon the world, the cold brine rejects its cursed burden and the Forlorn Isle rises again, eagerly awaiting fresh victims. Despite the impressive tally of adventurers lost to the basalt bowels of the so-called Death King’s ruined keep, many brave souls have sailed there over the years, drawn like moths to a flame by legends of lost ancient treasure. When dawn breaks, the bleak island sinks into the deep once more, entombing alive those who would steal its sinister secrets.

Evil is everywhere and humanity must be ever vigilant against its slow encroachment into all that is great and good. Small cults—dedicated to ancient, blasphemous powers—lurk throughout the world ready to carry out their dark patron’s bidding. One such small cult dedicated to Braal, god of hate, malice and revenge, dwells in the Shadow Fane below Languard’s High City. The cultists kidnap and murder in their dark god’s name, but recently they made a mistake that threatens their very existence. Instead of kidnaping a beggar the cultists accidentally kidnapped the daughter of a wealthy merchant and he is offering a handsome reward for his daughter’s safe return.

Famed for his unswerving devotion to his celestial lord and his magical sword, Demon Bane, Kal Voren was a paladin-hero of old. For five decades he stood between Ashlar’s commonfolk and the darkness ever-pressing in on the small, isolated domain. Death is an implacable foe, however, and eventually old age caught up with the redoubtable paladin. Laid to rest not in the scared sepulchre below Tor Abbey but among the hills of his youth Kal Voren’s legend—and stories of his legendary blade—live on long after his hidden crypt was lost to time.

A recently landslide, however, has returned Kal Voren’s lost crypt to the world of men. And with it have returned the stories and legends of Demon Bane which is said to rest unclaimed and wielded with him in his sepulchre.
» Browse other products by Raging Swan Press
Home Back to Results