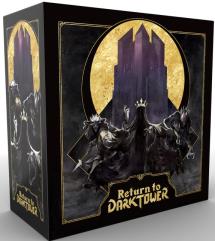 Condition: SW (MINT/New)
Our Price: $249.95
Retail Price: $295.00
You Save: $45.05
NOTE: This product is a Pre-Order and is not currently available. The estimated release date is February 2021 (subject to change).
MAX 2 per customer. Orders containing preorder products will be held until all preorder products on the order have arrived in our warehouse. 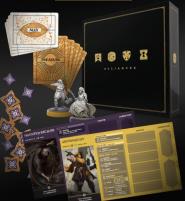 The coolest game to ever hit the planet first appeared some 38 years ago, featuring an electronic tower that lit up, played music, and somehow ran an epic fantasy adventure game with its state-of-the-art technological wizardry. That game was Dark Tower. We want to bring you that same sense of awe and wonder, pushing the boundaries of what a board game can actually do. After 3 years of painstaking work by a team of two dozen designers, engineers, and artists, we are thrilled to present to you a game with echoes of that long-gone wonder but ultimately unlike any game you've ever experienced.

Return to Dark Tower is a cooperative game for 1 to 4 heroes who undertake epic quests, fight fearsome foes, and test their mettle against the looming darkness of the titular tower. Designed by Rob Daviau and Isaac Childres -- designers of the two highest rated games of all time on Board Game Geek -- along with Noah Cohen, Brian Neff, and Justin D. Jacobson, the streamlined rules offer players difficult choices about when to advance their objective, gather resources, deal with threats, or level up.

Return to Dark Tower constantly presents new challenges. The adversary within the tower, the plan to access the tower, and the suite of foes you will face can mix and match in thousands of combinations. Play the same array over again or try something completely new.

Created by a world-class team of designers and engineers led by Tim Burrell-Saward, an expert in technology-augmented games, the Tower itself is a game component without equal. From its very foundation, it's been devised to play an integral role in the game. Using a collection of magical-yet-reliable technologies, it generates game moments that simply wouldn't be possible without it. The Tower literally and figuratively dominates the table, drawing upon all of these powers to foil you. You will grow to curse its name.

Azkol's Fotune offers a wealth of riches for a truly rich game experience!

» Browse other products by Restoration Games
Home Back to Results