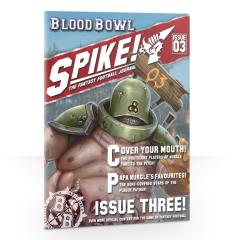 Guest edited by Glug Glottington, this is the third issue of Spike! Journal. Covering Nurgle teams, with a veritable host of brand-new content for Blood Bowl, this is sure to be a must-have for Chaos coaches... Contained in the 36-page journal:

» Browse other products by Games Workshop
Home Back to Results