#2 "It's a Nightmare!, Legends of Naggaroth!, Chat with the Rat" 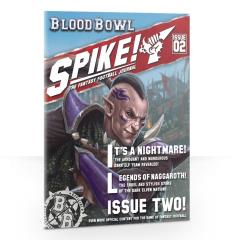 Sold Out
Last Stocked on 4/21/2019
Have one for Sale or Trade?
#2 "It's a Nightmare!, Legends of Naggaroth!, Chat with the Rat"
by Games Workshop
Category: Miniatures & Games
Sub Category: Warhammer Fantasy & Age of Sigmar
Genre: Magazine - Miniatures Gaming

Guest edited by Mali Keith, this is the second issue of Spike! Journal. Covering the Dark Elves, with a veritable host of brand-new content for Blood Bowl, this is sure to be a must-have for every player – not just the cruel and unusual fans of Dark Elves... Contained in the 36-page journal:

» Browse other products by Games Workshop
Home Back to Results