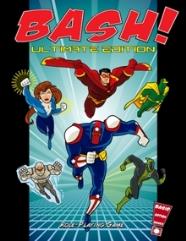 This book has everything you need to create characters and run super-heroic adventures within minutes. The rules are light and easy all you need are two ordinary dice, a piece of paper, and this book. Character generation is so simple, you could fit all the info you need on a 3x5 card, but we included a sheet anyway.

Do not assume that by simple, we mean incomplete, either. Bash has over 50 versatile super powers, numerous skills, and even rules for collateral damage. The action is fast and furious, paced over a series of panels, pages, and issues, just like a comic book.

BASH! has undergone some changes over the years, with updates in Megapolis and BAM! and we have incorporated many of these into a single rules set. In addition to an expanded, revised version of the game, you will also find:

Less record-keeping, more Awesome. Energy is no longer the "default" rule for handling powers-- so you have less to keep track of during play. Hero dice, Hero points, and team-work maneuvers are now a part of the core system, so you can really bring it to the bad-guys!

Easier to read layout, better explained rules, including many examples.

Character Archetypes: Writeups of various iconic super hero & villain archetypes such as the Brick, Martial Artist, and Blaster. These templates can be easily tweaked to quickly have a custom character!

Eras & Subgenres: One of the things BASH! Fantasy & Sci-Fi editions did was extensive work on the subgenres of Fantasy and Sci-Fi, such as Steam-Punk or Space Pulp. BASH! Ultimate Edition will do the same thing for Superheroes, enabling you to run a game with the theme & tone of the Gold, Silver, Bronze, or Iron Ages. There are also sections on Science Fiction, Fantasy, as well as Cosmic Superheroes.

Alternative Mechanics: Not everyone likes to multiply. Not to worry, alternate mechanics are included in the appendix.
» Browse other products by Basic Action Games
Home Back to Results