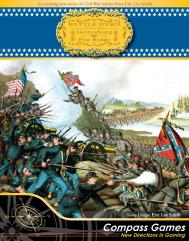 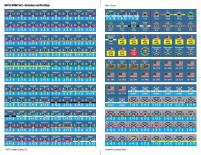 Battle Hymn is a new brigade-level game system that simulates the chaos of the America Civil War using a simple activation system combined with a detailed combat system. The system’s designer, Eric Lee Smith, originated the “chit-pull” activation system in his game “Panzer Command” and later used it in “Across Five Aprils,” Battle Hymn’s forerunner, both published by Victory Games. Units are organized by command, usually divisions, and activate for movement when the command’s activation market is picked from the cup. The system uses traditional mechanics for movement, with units differentiated by type, but adds a level of detail to combat that feels almost miniatures like. In fact, the system is designed for easy conversion to miniatures. When one side has the initiative they decide when their combat phase occurs, without it, you don’t know when it will happen.

Units have strength point steps, which are either “formed” or demoralized, and losses a taken point by point. Based upon the latest research into Civil War combat and tactics, units suffer attrition in both losses and demoralizations until they finally shatter and are removed from the map. There are two combat phases, each of which consists of two rounds of combat. Engagements are fluid, with retreats and advances setting up unexpected confrontations during the second round of combat.

Battle Hymn is a “player’s game” designed to play fast and provide lots of fun and historical insight. With scenarios taking as little as an hour, up to a full campaign taking eight hours, there is plenty of variety. The system is streamlined and does not have the complications seen in other games, such as logistics and leadership hierarchy. Here it is all about strategy, movement, and fighting.

Gettysburg: The Tide Turns needs no introduction as to subject, but the treatment is noteworthy. Using a graphics approach based upon the maps produced by the US Government after the war, the map is a pleasure to behold. There are six scenarios in the game, some of which have alternatives for additional variety.

Pea Ridge: The Struggle for Missouri simulates the decisive battle of Pea Ridge, which determined that Missouri would stay in the Union. It could have gone the other way. This is a classic meeting engagement with the Confederates on the offensive and outnumbering the Union for once.

SCENARIOS (Note: Some scenarios have alternatives making them in effect two or more scenarios.)