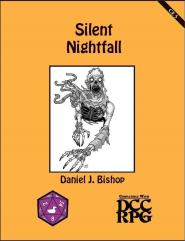 There are often periods of greater or lesser magical influence in the world. Millennia ago, during a period of reduced magical activity, there was a nuclear power station at this location. When magical influences began to spread once more, the nuclear core became unstable, and began to develop a form of malevolent sentience. The ancients placed the core in a shaft three miles deep, the last 500 feet of which were filled with heavy water. This shaft, and its attendant control center, were given the codename “Silent Nightfall”.

In the ages since, much of the complex has collapsed or ceased to function, but the main shaft still remains, going three miles deep into the ground. The rooms that remain have undergone great changes, having been used for many different purposes and by many different creatures over the centuries. As a result, the original purpose of the shaft, rooms, and corridors has become obscured.

One of those who used the area was the wizard Mortmallion the Pale, who stole the Whispering Stone from Elfland. He hid himself and the stone in the Silent Nightfall complex, but the weird energies coming up from below changed him. Mortmallion can still be found, deep below, as the shaft crawler. Over time, the Whispering Stone became confused with the area where it is now found, and some texts refer to it as “Silent Nightfall” without making it clear why the stone has this name.

Currently, they are used as the nesting ground of owl-like humanoids that call themselves the grallistrix. Incubating their eggs in the Silent Nightfall complex has changed them, and they have become dangerous nocturnal predators in the region. The grallistrix hunt in triads, and locate prey by an extraordinary sense of hearing. As a result, communities nearby observe unexpected quiet at night – there are no late night gatherings. Inns and taverns close their doors with the fall of night.

Finally, the nuclear core itself has gained sentience and a malevolent, demonic intelligence. Imprisoned at the bottom of the shaft, it knows no other name than Silent Nightfall. So long as the demon remains bound, it is no great threat to the PCs or their world. In fact, they may be able to deal with it in order to gain magical aid.

In this way, the term “Silent Nightfall” has come to mean the following within the context of this location – the remains of the nuclear complex, the practice of avoiding loud noises after dark, the Whispering Stone, and the great demon imprisoned at the bottom of the shaft. This gives the judge many ways to lead the PCs into this material. It also allows the judge to make finding information difficult, as the many uses of “Silent Nightfall” spill into each other.

A challenging Dungeon Crawl Classics Adventure for 2nd level (or above).
» Browse other products by Purple Duck Games
Home Back to Results