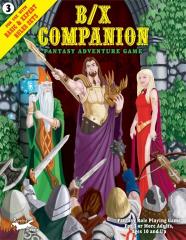 As homage to “what could have been” the Companion is laid out in much the same fashion as the original Basic and Expert rule sets (you can see some photos here). Those who are familiar with the Moldvay/Cook/Marsh rules should find the B/X Companion readily recognizable. It is designed to work with the B/X rules and pick up where they left off (specifically, level 15). Because Labyrinth Lord is based on B/X, it is readily adaptable to LL. However, LL also adds “bonus material” not present in B/X, specifically:

» Browse other products by Running Beagle Games
Home Back to Results