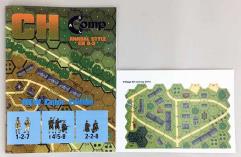 Fornebu, Norway: 9 April 1940: A key element of Operation Weserübung (the invasion of Norway and Denmark) was the seizure of three important airfields by paratroopers and air transported infantry. The target airfields were: the Aalborg airfield in northern Denmark; Sola outside Stavanger; and Fornebu outside Oslo. The field at Fornebu was still under construction but nearly complete. In the spring of 1940 Fornebu was base for Jægervingen, the fighter wing of the Norwegian army air force. The defense of the airfield was left to the ground crews of Jægervingen and an attached searchlight platoon from the Oslo Air Defense.

The German plan was for Fornebu to be initially assaulted by paratroopers landing directly on the airfield followed 20 minutes later by reinforcing elements of the 2nd Battalion of the 324th Infantry Regiment landing in transport aircraft. However, dense fog caused transports carrying the paratroopers to turn back. The commander of the II/IR324 decided to press on. The Germans flew on through the fog to find the conditions at Fornebu clear enough to land. The defenders were only able to put up light resistance against the assault and within an hour had retreated from the airfield and within 2 hours have fled from the area. The one notable success, though, of the defense was to cause enough delay of German forces to allow the King to escape from Oslo.

CH 6-2 ANNUAL EDITION is here, with color format, color scenarios, Stonne focus, and some bonus content - all creating a 36-48 page magazine that will be fun and colorful! All the boards are retro geos, so you can use boards like 22 ... or better yet deploy your SWEET 16 versions in their place and make for all kinds of new experiences!

» Browse other products by Critical Hit
Home Back to Results