Battle of Tanga 1914, The - The Campaign for German East Africa 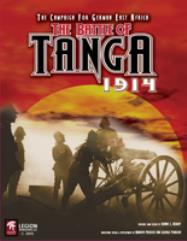 Often referred to as 'The Battle of the Bees', the Battle of Tanga, an amphibious attack launched by British and Indian forces, established the burgeoning reputation of Colonel (later General) Paul von Lettow-Vorbeck by the manner in which he successfully defeated the British-led attempt to capture German East Africa.

Some 80km from the border of British East Africa, Tanga was sited on a high plateau in German East Africa, and was its busiest sea port as well as being the site of the crucial Usambara railway. Already the subject of gunboat diplomacy resulting from a British warship on 17 August, Tanga had been spared from bombardment by an agreement extracted from the town's population to refrain from initiating local aggression. However the British subsequently changed their minds and ordered General Aitken to capture the German colony via a landing at Tanga in November 1914; it was to be the first major action of the war in German East Africa. Something of a fiasco from the start, Aitken's force of 8,000 insufficiently trained Indian reserves (from Indian Expeditionary Force 'B') were preceded by the inopportune arrival, on 2 November, of a British cruise, Fox, announcing the termination of the August agreement.

Alerted by this and Aitken's openness in his intentions - no attempt at concealment was considered - Lettow-Vorbeck was able to rapidly and substantially reinforce the town's local defence contingent (initially a single company of men). Believing (incorrectly) that the harbour had been mined, Aitken's force gingerly landed approximately 3km south of Tanga harbour on 3 November, and without having performed standard reconnaissance of the area. Next morning Aitken began to march upon the town, again without advance reconnaissance. Arriving German forces quickly and effectively broke up the ill-formed advancing Indian parties; by early afternoon the fighting had taken upon the nature of jungle skirmishing, occasionally interrupted by swarms of angry bees prevalent in the East African bush (hence the action's nick-name). One British soldier commented afterwards, "what with a bunch of Germans firing into our backs and bees stinging our backsides, things were a bit 'ard...".

Although numerically outgunned eight to one, Lettow-Vorbeck launched his own counter-attack on the evening of 4 November, backed by around 1,000 troops trained in the Prussian tradition. Rapidly overrunning the hastily (and badly) prepared British positions, Lettow-Vorbeck's forces obliged the British force to retreat back to their boats, an exercise that took much of the following day, 5 November. A costly defeat, the attack at Tanga had cost the British 847 casualties (including 360 fatalities). In turn the Germans had suffered 67 deaths (from a total of 148 casualties), but Lettow-Vorbeck gained much booty from the supplies left behind by the British in their hasty retreat, including machine guns, rifles and 600,000 rounds of ammunition.
» Browse other products by Legion Wargames
Home Back to Results