Blocks in the East - The Russian Campaign 1941-45 (Limited Edition) 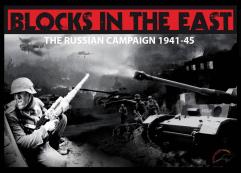 BLOCKS IN THE EAST is a concept game covering the whole Eastern Front campaign from 1941 to 1945.

Developed on wooden blocks and cubes system, with a full laminated multicolor 100x70cm map board, there's not any paper component.

All the over 600 wooden/plastic components have been created by the best Italian artisinal industry and painted "A baratto", a technique usually adopted for painting car parts and accessories.

» Browse other products by Vento Nuovo Games
Home Back to Results