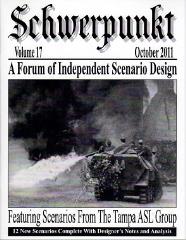 This issue’s 24-page booklet contains: Brook White's A Tale of Two Divisions: The 272nd Volksgrenadier Division and the 4th Infantry Division in the Hürtgen Forest, as well as our trademark analyses and designer’s notes for Scenarios SP193-SP204. Each of the 12 scenarios are printed on cardstock in our easy-to-read format. The scenarios are in keeping with the Schwerpunkt tradition of tournament-sized as well as medium-sized actions. There's something is this pack for players of all experience levels!

SP194 Requiem for a Dreadnaught: Ptycha, Ukraine, U.S.S.R., 30 June 1941: A reinforced German rifle company with supporting PzIII's, PzIVs and PSW 231 (8R)s attack to clear a village held by the Russian 34th Motorized Rifle Regiment. Russian T-35 land battleships make a rare appearance in this 5.5 turn scenario, set on boards 1a, 2a, and 62.

SP195 Retreat from Hannut: Hannut, Belgium, 12 May 1940: yet another brilliant France 40 scenario from the Tampa Group. In this action a elements of the 3e Division Légère Mécanique are conducting a withdraw while under pressure from closely pursuing tanks of the 16th Panzer Division. This nail biter of a scenario is perfect for tournament play. Game Length: 5 turns. This scenario uses boards 53, 59, 62, and 63

SP196 Hussars and Hounds: Udem, Germany 2 March 1945: Challenger tanks supporting the 3rd Monmouthshire Regiment's attack against a stubborn group of panzergrenadiers, run into a couple of JgPz IV/70's. This is a fast-playing tournament action set on boards 59 and 63. Game Length is 4.5 turns.

SP197 The Clinch: Kasnaia Poliana, Russia 5 July 1942: Brian Williams returns to Schwerpunkt with this a fast-playing 5.5 turn action that features elements of the 11th Panzer Division with PzIII's conducting a screen and a withdraw. This action packed-thriller requires both the Russians and Germans to exit off the same board edge, while engaged in a running gun battle. This scenario uses boards 1b, 44 and 57.

SP198 Fish in a Barrel: Kleinbautzen, 26 April 1945: Hugh Downing designed his this 5.5 turn scenario that has two Nashorns with supporting German infantry defending the hill and a crossroads on board 2a. Four Russian T-34/85s and a depleted Russian infantry company make this a fine tournament selection.

SP199 Para-Trap: Sangigai, Choiseul Island, The Solomons, 30 October 1943: Mike Faulkner hacked this scenario out of the jungle and bought it to the pages of Schwerpunkt. Elements of the 1st Marine Parachute Regiment fight desperately to hold board 2a's Hill 523, while a company of Japanese infantry conducts a counter attack. Game Length is 7 turns.

SP201 Doppleganger: Melin, France: 2 September 1944: Mike Augustine designed this unusual scenario that features elements of the 1st Ukrainian, 30th SS (White Russian No. 2) Division attacking 68th SS Cossack Cavalry Battalion. Here's your chance to finally use both the blue SS and black SS counters against each other. This scenario is set on boards 5, 24, and 52. Game length: 5.5 turns.

SP202 Fiery Finale: Paretz, Germany, 24 April 1945: This scenario begins as a Russian infantry company's surprise attack is botched and then spoiled by a limited German counter attack. With Stalin tanks dueling with King Tigers and a flame throwing halftrack, there is plenty of heavy metal action for both players to enjoy. Mike Augustine designed this scenario set on board 3a. Game length: 6 turns.

SP203 Chaos Crossing: Nagyvarad, Hungary, 12 October 1944: Pete Shelling, is back again with this 5.5 turn gem, set on boards 20 and 51. This scenario features a mixed force of German and Hungarian infantry defending a bridge while Russian infantry and Stalin tanks close in from three sides. There is a lot of thrilling action in this medium-sized scenario.

SP204 Yankee Pride: Kaundorf, Luxembourg, 28 December 1944: Pete Shelling rounds out our 2011 issue of Schwerpunkt with a Battle of the Bulge action. Elements of the of the American 26th Infantry Division are attacking to clear the Fuhrer Grenadier Brigade from hilltop village portrayed on boards 41 and 60. Game Length: 6 turns.
» Browse other products by Sherry Enterprises
Home Back to Results