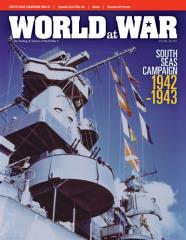 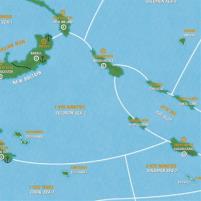 The South Seas Campaign, 1942-43 (SSC), designed by Joseph Miranda, is a two player, strategic-level wargame of intermediate complexity that covers the struggle for control of the naval, air and land lines of communication between Australia and the US during those two years. Most ground units in the game represent divisions, brigades or regiments. Aircraft units represent two groups or air regiments (six to eight squadrons). Ship units mostly represent one fleet aircraft carrier, “divisions” of two light or escort carriers, two battleships, four cruisers, squadrons of six to eight destroyers (plus Japanese light cruiser destroyer leaders), and various numbers of other ship types. On the area map, each inch equals 90 miles. Each turn represents from two weeks to two months, depending on the tempo of action at any given time.

Articles in this issue: