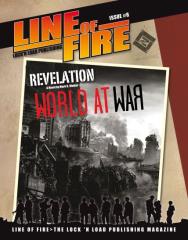 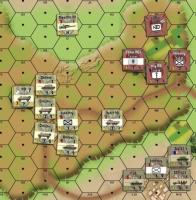 Included for there popular All Things Zombie is a Battle Report by Norm Lunde and two scenarios, one of which uses new counters drawn specifically for this issue. The science fiction and horror segment of the magazine doesn’t end there. They have an extensive preview of there upcoming solitaire game, Space Infantry, a look at combat in House of Spirits, and a glimpse at Zombie War. To top it off they got some tips of strategy for Victory Point’s science fiction game, Forlorn Hope, and an interview with Alan Emrich.

But it’s not all about fictional science. We got strategy for Tank on Tank, an historical article on Vietnam, the 911 on Sweden’s Forces in Operation Garbo, and a bit about combat in Britain Stands Alone. There is also a nice Corps Command Totensonntag Battle Report.

Line of Fire is a professionally printed magazine with 88 die-cut counters, and two card-stock maps.