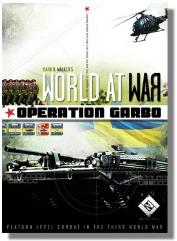 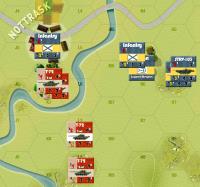 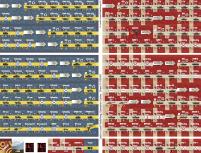 When the war began both NATO and Warsaw Pact aircraft violated Swedish airspace in order to strike each other. As a show of force, Sweden sent up her own fighters, and also filed a complaint with the U.N., but these measures did nothing to prevent the violation of her airspace. The Soviet Union was getting the worst of the air strikes and threatened to invade Sweden if the strikes continued. As the Swedish politicians mired themselves in craven bureaucratic banter, the NATO air strikes continued. The Soviets’ patience quickly withered and they went ahead with their invasion. Securing Sweden, the Soviets hoped, would neutralize the NATO air strikes and provide them with a foothold from which their bombers could more easily attack Great Britain. It also threatened NATO’s left flank and put Norway in a difficult position.

On paper the invasion was a great idea for the Soviets, but they were constrained by force commitments in Central Europe, thus only second-line troops and elements of elite parachute units and naval infantry were available for the attack. Regardless, the invasion went ahead, and it was a surprise. Sweden had little time to mobilize her army, but local Swedish commanders know how important having the initiative was, and they counterattacked as soon as they could. In the initial fighting, the few elite Soviet forces tried to overcome the Home Guard defense units. Later, the Swedes were able to organize their forces, and their armored brigade, the Sledgehammers, counterattacked. WWIII had expanded to peaceful Scandinavia, and World at War: Operation Garbo, designed by Nils Idemalm, will take you there.

Thor's Hammer: Pits elements of the Swedish 10th Mechanized Brigade against elite Soviet naval infantry and their tank support around the occupied port of Sodertaljie.

We Can Still Hurt Them: Elements of the Home Guards strike toward the Arlanda airport. Since the Guards had a difficult time mobilizing, the units are a mish-mash of what the brigade commander could throw together. But they are determined to put up a fight.

Buy us Some Time: the Swedish 5th Tank Battalion’s defense of the fortress near Boden against a large Soviet force that includes airmobile units.

A General's War: Features the Swedish Supreme Commander of all armed forces; after his helicopter is shot down he must lead an AT platoon in a desperate battle against Soviet paratroopers and naval infantry. It may be the first time in war-gaming history that the equivalent of a four-star general takes the role of a lieutenant!

Into the Valley of Death: A ragged Swedish reinforced tank battalion collides with a soviet tank unit. The Swedish brigade is trying to strike towards a harbour to stop the flow of soviet reinforcements. Based on an action from the book Operation Garbo.

Swedish forces include its upgraded Mark 4 variant of the British Centurion tank, the famous Swedish S-tank—which has no turret!—and the PBV 302, a combat-proven APC. Other units include AT helicopters, tracked TOW and SAM launchers, and the hard-hitting, but fragile, IKV 91 tank destroyer. Home Guard units made up of old men with old rifles and fast, jeep-driving recon units support the heavier tank units. The Soviet forces include units from the 76th Airborne Division, with BMDs, BRDM2s, and other vehicles. Naval infantry units include amphibious tanks such as the PT-76 and the more common T-55 and BTR vehicles. Heavy tank units made up of T-72s are present, too, of course, and new support weapons include the man-portable SPG-9