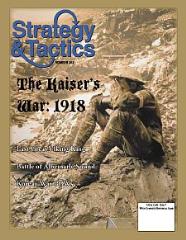 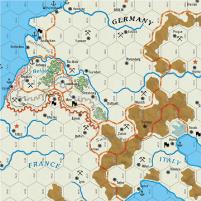 The Kaiser’s War (KW), is an intermediate-complexity, strategic-level simulation of the last year of World War I in Europe, including an optional what-if extension into 1919. As 1918’s campaign season opened, the Central Powers had defeated the Russian Empire and dominated much of Europe, yet less than a year later the Western Allies were triumphant.

The concept of “victory points” (VP) is central to play of game. Players begin each scenario with a designated number of VP. They may expend them to gain reinforcements and carry out certain actions. They gain new VP as a result of achieving objectives; they lose VP when they lose units in combat. To win the game you must have more VP than your opponent; so play is a balancing act between expending VP and attaining objectives.

This is a two-player game: one player controls the Central Powers; the other player controls the Allies. Each hex on the map represents 62 miles (100 km) from side to opposite side. The map shows all of Europe from London to Moscow and south to Italy and Greece. Each game turn represents two months. Units of maneuver are mostly armies, along with certain elite and specialized corps. There are 17,500 words in the rules. Two experienced players can finish the shorter (historical) scenario in about four hours. Designed by Joseph Miranda.