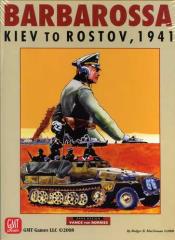 GMT is proud to present the fifth epic game in its award-winning series of east front games, Barbarossa: Kiev to Rostov. This is a two-player, or two-team, operational level game depicting the battles of the southern wing of the Axis invasion of the Soviet Union during 1941. This game picks up where an earlier game in this series, Barbarossa: Army Group South, left off. It begins in mid-August and ends in December 1941, historically near the cities Kharkov and Rostov.

This comprehensive game system was designed at a scale for divisions but it accommodates the many independent brigades, regiments, and special battalions that were also available for this campaign. These include units for rocket artillery, heavy artillery, armored trains, assault guns, engineers, Stukas, Sturmoviks, anti-aircraft guns, NKVD, Stormtroopers, militia, base units, and more. You can tailor your army to fight a lengthy campaign over variable conditions.

Despite its size we have kept the overall rules within the context of other games in this series thereby leaving nearly all mechanics familiar to veteran East Front Series (EFS) players. Such familiar mechanics include ranged artillery, air units for close support or interdiction, Soviet HQs, retreat or stand orders, weather, reaction movement, railroad movement, strategic movement, overruns, combined arms, fortifications, special supply situations, and more. Veteran players should be able to pick up game play right away. For those who are new to the series, many examples of play will be found in the rules book as well as a Learning scenario to fully illustrate game play and some of the decision making for each battle.

Note that all games of the Barbarossa, or EFS, series are built to fit together. If space is at a premium for you, please note that four of the eight scenarios here in this game alone require only one map or less.

Barbarossa: Kiev to Rostov challenges you to balance your attack and defense in each sector of the game map, regardless of scenario. Neither side has sufficient resources in either troops or supplies so the key to winning will be good game play and a sound plan. Can you do better than the titans that struggled for the Ukraine in the summer and fall of 1941?

#1 Learning Scenario-Rostov Redeemed: The German 3rd Motorized Corps has just taken Rostov and now attempts to hold it against a massive Soviet counteroffensive. This was the first in what turned out to be a series of disasters that befell the German army during the winter of 1941/42.

#2 Kiev Pocket: In mid-August the Germans had just cleared the Uman Pocket (the last battle of the Barbarossa: Army Group South game in this series) and looked to exploit their advantage to quickly conquer the rest of the Ukraine. Meanwhile, the Soviets had built a whole new group of armies to the east of the Dnepr River. This campaign resulted in the greatest encirclement battle of the war, perhaps of all time, as the Soviets over-committed to the defense of the river. Yet this was not a sure victory. Play testers have called this scenario the best yet in the entire series of games. You simply must experience this battle, one of the decisive battles of the war in the east.

#3 Battle on the Sea of Azov: In late September with disaster looming to the north and a German offensive building against the Crimea, the relatively untouched Soviet 9 and 18 Armies in the southern portion of the Dnepr Bend were called upon to act, this time to save their comrades defending the Crimea by striking toward the rear of the German 11th Army. While their attack made but small headway, some Romanian defenders were overwhelmed. The situation could have opened up to destroy the German rear and then threaten the rear of the rest of German Army Group South. Perhaps this offensive could as well reverse the tide of the German advance. Or was someone in the Kremlin just dreaming?

#4 Battle of Sumy: Some small battles lend themselves wonderfully to focus treatment and this battle at the end of September near the north Ukrainian town of Sumy certainly qualifies. Handled on its own special map this becomes a contest of mobility between a German motorized corps on the one hand and a strong Soviet cavalry corps on the other, with the Soviets getting timely reinforcements from the 1 Guards Motorized Rifle Division. This very balanced situation plays quickly and perhaps is the best introduction in the series to the game system.

#5 To Kharkov: It has become almost trite to say Russia is vast but for this scenario the German player will declare this many times. Even though the German has just won the Kiev Pocket Battle, now the great industrial city of Kharkov beckons in the distant east. The Soviets have reassembled their armed forces yet again but this time the German has sent his panzers north to Moscow and out of this game (see GMT's Typhoon! Game). German 6th Army, a true hard-luck formation, gets the honor of leading the advance and they now experience their first starvation of the war, similar to that they will suffer at Stalingrad a year later, although without the desperation of that later battle. Even so, the 6th Army is formidable; so will the arrival of mud be the only thing saving the Soviet's behind? Or, will he have finally mastered the art of war against the Nazis?

#6 To the Don: This is the short version of the campaign game. It starts at the beginning of October to coincide with the Typhoon offensive against Moscow (see GMT's Typhoon! game). Strategically, the Soviets are presented with a dilemma; every bean and bullet sent south is one less for the do-or-die defense of Moscow. The Germans faced the same dilemma so now both players are short on troops and supplies and even short on options. The campaign now changes its character to become one of managing scarce resources over vast distances, the very statement of war in Russia.

#7 To Rostov: The most dramatic moment of the late drive to the east was the drive to Rostov, the gateway to the Caucasus where lay the oilfields the Germans so vitally needed to run their war machine. The Germans have won victory after victory for nearly six months even though the Soviets have set successive armies in their path. Is this perhaps the Soviet last ditch and their last army? Are the Germans truly at the end of their supply line? Will winter stop the Germans? Historically in this near even contest, the panzers actually got into the streets of Rostov; can you?

#8 Barbarossa to Rostov: This is the full campaign, mid-August through December, a very full 57 turns over vast distances. The Germans begin in supply difficulty and will have to pick a pause to advance their main bases. The Soviet player will have to take care he does not expend all his effort too far to the west, thereby leaving nothing for the final battles. Neither player has resources to do it all but it can be fun trying. The East Front experience is not complete without playing this full-size scenario.
» Browse other products by GMT Games
Home Back to Results