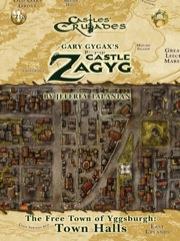 The Castle Zagyg City Expansion series explores each district of the Free Town in tremendous detail. Individually treated each inter-connecting district is presented in its own book with accompanying maps. Loaded with adventure hooks, intrigue, thousands of non-player characters, and scores of encounter locations, the Yggsburgh City Expansion Books present the greatest town in gaming history in all its glorious detail.

The Town Halls District of the Free Town of Yggsburgh is the government center of town, with official entertainment, municipal warehousing, and correction facilities. Among the many locations of this sector are the town Hall and courts, the gaol, the workhouse, the library, town museum, a major inn, a theater and a menagerie.

The size of this sector belies its scope, for here the bold adventurer may seek legends and lore of the East Mark, meet prominent town officials, and, should the character find themselves on the wrong side of the law, be imprisoned. This module offers a comprehensive view of Crime & Punishment in Yggsburgh, from accusation to arrest, from trail to sentence. Crime may result in a monetary fine, a flogging at the cart, pillory time, bondage, gaol time, or (at its extreme) capital punishment.

Legal officials, law enforcers, and bureaucrats abound herein, and not a few of them are "on the take" for indeed the Thieves Guild and the Assassin' Guild hold much sway in the Free town. Politics intrigue, ambition, and corruption welcome to the Town Halls District of Yggsburgh!

South of the fabled Castle Zagyg lies the Free Town of Yggsburgh, a heavily fortified community of some 25,000 residents, with another 10,000 or so persons dwelling on the lands it claims as its own. The town is constructed on a rock bluff where the River Nemo is joined by the Urt River, an area that encompasses about one square mile. The town proper is comprised of 19 districts, fenced in by walls, towers, bastions, and gatehouses. Five more districts, "The Outs", comprise its suburban areas, most of which are east, across the Yggsburgh Canal. Together these 24 districts make up the ordered and prosperous Free Town of Yggsburgh.
» Browse other products by Troll Lord Games
Home Back to Results