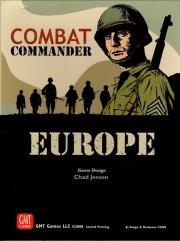 Combat Commander is a card-driven board game series covering tactical infantry combat in the European and North African Theaters of World War II. One player takes the role of the Axis (Germany in this first game; Italy & the Axis Minors in later installments) while another player commands the Allies (Russia & America here; Britain, France & the Allied Minors in future expansions).

A game of Combat Commander has no strict sequence of play. Each turn is divided into a variable number of Player Turns, each of which may consist of either: the active player expending one or more Fate cards from their hand for their Actions; or passing, which allows the discarding of one or more Fate cards. Players redraw up to their maximum hand size at the end of each of their own Player Turns. Additionally, Reactions may be played by either player at any time, so long as the prerequisite listed is met.

FATE CARDS: Players will take turns playing one or more “Fate” cards from their hands in order to activate their units on the mapboard for various military functions. Each nationality has its own 72-card Fate deck highlighting its historical strengths and weaknesses (lots of Smoke for the US; marksmanship bonuses for Britain; commissar events for the Soviets; broken Italian units will surrender more often; etc.). Each Fate card contains one Action and one Reaction: only one of which may be declared when the card is played. The bottom portion of each Fate card contains an Event, a random hex symbol, and a 2d6 die roll – these can never be ‘played’ from the hand, only ‘revealed’ from the top of the draw pile when a game situation instructs a player to do so.

ACTIONS include: Fire, Move, Advance, Rally, Rout, Artillery Request and Artillery Denied. Each nationality also has a varying number of Command Confusion Actions which act as duds while in hand – these cards are useless except for any possible Reaction on the card. Actions, when played, generally activate a single unit to perform that Action, unless a Leader is activated: in which case it can further activate any or all non-leaders within its Command Radius to perform the same Action. There are 15 different REACTIONS. For example:

• Sustained Fire – Add +2 when firing a Mortar or Machine Gun. If the fire roll is “doubles”, break it.
• Smoke – If a unit with boxed Movement is activated to Move or Advance, place Smoke in or adjacent to its hex.
• Grenades – Add +2 when firing at an adjacent hex.
• Dig In – Place foxholes in a friendly hex.

There are 36 different EVENTS – both good and bad – that will occur at random intervals to add much chaos and uncertainty to each player’s perfect plan. Event examples:

• Walking Wounded – Select one eliminated unit. Return that unit to play in a random hex, broken.
• Hero – If not already in play, place the Hero in a friendly hex. Rally one broken unit there.
• Reinforcements - Roll on the Support Table. Select one available unit then place it along your map edge.
• Battle Harden - One unit becomes Veteran.

Units and weapons are rated for their Firepower and Range, while units also have a Movement allowance and a Morale number. Most importantly, Leaders have a Command number as well. Command has two functions in Combat Commander. First, it allows a leader that has been activated to perform an Action the ability to further activate any friendly non-leaders up to X hexes away, where X is its Command number (or “Command Radius”). Second, a leader’s Command number is added directly to every stat on every non-leader currently occupying the same hex. So, for example, a 5-FP, 5-Rg, 5-Mv Squad with 7-Morale in the same hex as a Leader with a Command of 2 would have stats of 7-7-7 and 9 for all purposes as long as that condition existed.

Average playing time is about 90 minutes per scenario. A scenario is played on one of several mapsheets, each with a 10x15 hexgrid depicting various terrain at a scale of 100 feet per hex. In addition to playing one of the many pre-generated scenarios included with the game, players can roll up random situations, as well. Playtesters described both types of scenarios as “fast, furious, and addictive.”

Replayability for Combat Commander is high. Our core group of four testers has logged over 230 roll-your-own scenarios and still ask to play on most game nights. And with unlimited possibilities as far as additional scenarios, maps, units, weapons, variants, etc. that can be released in the months and years to come (as well as the new games covering the British, French, Italians, and the Pacific Theater now in the design stage), Combat Commander is one of those rare exceptional values in wargaming – one that can be revisited time and time again, each with a new tale to tell.