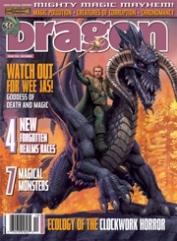 Core Beliefs: Wee Jas
by Sean K Reynolds
Embrace the ways of Wee Jas and revel in the deepest mysteries of existence. Through her and her faith lies the path to magics untold, unearthly beauty, and ultimate death. This is only a sample of the Ruby Sorceress' power.

This spell functions like disguise self, except you can only change the appearance of your clothing (including weapons, armor, and equipment) and make superficial changes to your own appearance. For example, you could make ragged traveler's gear look like a beautiful gown or a cleric's vestments. Superficial changes to your appearance include removing or adding beauty marks and signs of aging, along with any coloration change that could be accomplished with make-up (lips, cheeks, hair, and so on). You are still recognizable as you and you cannot use the spell to create a true disguise (although you could change the appearance of your clothing to include a hood or mask to conceal your features).

Once per hour as a standard action, you can change your appearance according to the above guidelines, but doing so reduces the duration by 1 hour for each change.

Magical Pollution
by Hal MacLean
Some arcane effects even dispel magic can't clean up. Included in this article are new templates, magical locations, and hazards such as the following.

SHADOW NIGHTMARES (CR 3)
Those who deal with the dark and mysterious forces of the Plane of Shadow don't do so without side effects. Gradually, overuse of such magic allows formless shadow essence to slip the bonds of worlds, weakening the barrier between the Material Plane and the dark transitive plane. While few notice the plane's subtle touch during daylight hours, at night, when the mind is open to outside influences, the shapeless spirits of the Plane of Shadows intrude upon mortal dreams.

Shadow nightmares generally manifest in an area where creatures from the Plane of Shadow, frequent travelers to that place, or shadow casters (see the Tome of Magic) dwell. These dreams might only affect creatures within a few dozen feet of a particular area or, in the case of more powerful or frequently used shadow magic, the span of miles. Any creature that falls asleep in this area cannot rest, waking the next morning fatigued and unable to regain arcane spells that day, the creature's mind becomes vulnerable to the influence of the Plane of Shadow, taking a –2 penalty on all saves made against spells with the shadow descriptor and the special abilities of creatures native to the Plane of Shadow for the next 24 hours. Creatures that sleep in an area of magical light, such as that lit by a light or continual flame spell are unaffected by shadow nightmares.

Creatures of Corruption
by Jake Manley
Discover what is spawned when magic goes awry. Three new horrible monsters to plague your PCs, including the Alchemical Undead, the Corrupted Creature template, and the toxic ooze. Here is a sample encounter.

TOXIC OOZE
Sewer Slime (CR 7): The sewers underneath most cities are vast labyrinthine complexes of twisting tunnels and fetid pools of waste and runoff. Workers are often paid to maintain and expand these sewers to ensure the sanitary conditions of the streets above. Finding such workers has become incredibly difficult in light of recent events. Four sewer workers have gone missing over the past few weeks, leaving behind no sign. The rest of the workers refuse to go back to their job until the danger is abated. What no one knows is that a lone toxic ooze has formed in the sewers from the waste of a failed attempt to create a flesh golem. It has since consumed a great deal of material, including the four missing workers, and has split into four different oozes, each prowling the depths. Characters who go below to investigate the problem might find that the infestation is harder to clear than first expected. If even one ooze is allowed to live, the problem will return again after a time.

Plus!
The Ecology of the Clockwork Horror, Class Acts, First Watch, Sage Advice, Savage Tidings, comics (including Order of the Stick), and more!
» Browse other products by Paizo Publishing
Home Back to Results