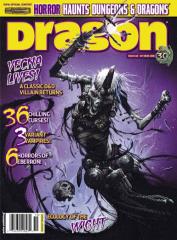 Relics
The following tome is prized amongst the cultists of Vecna and highly sought after when the need is great.

Tome of Shared Secrets: A lesser artifact devised to gather information, this is a book of modest size, appearing as a simple illustrated bestiary. If a reader slices open his hand and places it on a creature's page, he gains a +4 competence bonus on attack rolls, skill checks, and saving throws against creatures of that kind (such as "green dragons," "pit fiends," or "vampires") for six days. Each time the book's power is used in this way it drains 1 point of Constitution. Restoring this loss before the duration of the bonus expires causes the bonus to end prematurely. A reader reduced to 0 Consitution in this manner dies, his soul goes to Vecna, and his body animates as a mindless zombie.

Variant Vampires
by Michael J. Montesano
Bring new terror to the night with these three blood-sucking fiends: the savage, terror, and shadow vampires. Here is a sample of what your players might expect lurking in the gloom.

Strategies and Tactics
Attacking from surprise whenever possible, shadow vampires strive to keep their opponents off balance and terrified. Able to slip through the gloom or hide as an animate shadow, a shadow vampire prefers to single out a lone target against whom to make hit-and-run attacks, a shadow vampire often uses these lesser undead as decoys and diversions, commanding them to distract allies while it goes for its true target's neck.

Savage Tidings
by Jason Bulmahn, James Jacobs, and Erik Mona
The Savage Tide is here and this first installment of a new series provides that players of that campaign with the tips, tools, and tricks to survive it. This article provide 6 affiliations for your characters to join along with an overview of the city of Sasserine. Here is a small sample from one of the organizations.

Zelkarune's Horns
Background, Goals, and Dreams: Made up of barbarians, gladiators, and other skilled warriors, Zelkarune's Horns is a popular organization. Based around the Sasserine Arena in the Champion's District, this group manages and organizes all of its events. In addition, the group also funds numerous hunts and expeditions to gather new creatures for the arena or simply as trophies for the walls of its a-djoining hall. Due in large part to its reputation, this group is also the largest mercenary company in all of Sasserine. Members are often hired by noble houses, wealthy individuals, and even other affiliations to take on dangerous tasks.

Members of Zelkarune's Horns pride themselves in their combat prowess, and spend a great deal of their time practicing and sparring with one another. When out on a hunt, members are always on the lookout for some formidable beast to match up against and prove their skill. While many of the bouts and gladiatorial matches hosted by the group are to generate revenue, Zasker Grankus (NG male human barbarian 6/fighter 2), the group's leader, honestly enjoys entertaining the people of Sasserine. Zasker, commonly known as the "reformed barbarian," is a charismatic fellow and able leader. He spends most of his days talking to members about current problems and scheduling upcoming events.

Bestowed Curses
by Jonathan Drain
Make the heroes pay with these alternates for the most vile curse.

Horrors of the Daelkyr
by Nicholas Herold
The twisted nightmares of Xoriat return to menace your players with these 6 new monsters.

Plus!
The Ecology of the Wight, Spells of RAVENLOFT, Class Acts, First Watch, Sage Advice, and comics, including The Order of the Stick.
» Browse other products by Paizo Publishing
Home Back to Results