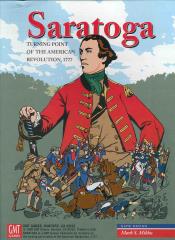 The 1st Edition of GMT's award-winning Saratoga: Turning Point of the American Revolution portrayed the tense struggle in front of Bemis Heights that became known as The Battle of Freeman's Farm. The 2nd edition includes that original battle PLUS it includes counters and rules to allow gamers to model the possibility of a renewed British attack on the next day.

NEW "Next Day Scenario" Information:
The Battle of Freeman's Farm was a marginal British victory but a strategic stalemate. American General Gates, in superior numbers and on prepared ground, was still astride the only road to Albany. Burgoyne saw no real flexibility in his orders. He had to press the attack and intended to do so the very next day.

Unknown to Burgoyne, the Americans were apprehensive of just such a push. They were down to just 40 rounds per man while British ammunition had been replenished to full 60 rounds per man. Wilkinson, Gates' Deputy Adjutant General, later testified, "If Burgoyne had attacked the American camp on the 20th or 21st as he originally intended, his force would have enabled him to lead a column of 5,000 rank and file against our left, where the ground was most favorable to his approach, whilst a feint on our right, by the plain near the river, would have kept every man at his station within our extensive lines, and under such advantages on his side, it is highly probable he would have gained a decisive victory."

As it happened, Burgoyne was convinced by his staff to delay the offensive for 24 hours during which time Clinton's coded message arrived from New York. An imperfect reading of that message suggested Clinton was on his way with a relief column when in fact all he planned was a diversion against the Hudson Highlands. Burgoyne decided to suspend forward movement, dig in, and wait for Clinton. Another one of history's "lost opportunities...."

2nd Edition Additional Features:
This "Next Day Scenario" begins with reduced and eliminated units from the previous day's fighting. British units are deployed forward. Several of them have thrown up flechettes (hasty breastworks). The scenario contains eight new combat units, two new leader units, British entrenchments, and ammunition depletion markers. Two of the new combat units are British batteries of heavy artillery drawn from their artillery park. These units have a range of 4 hexes and use the same range attenuation table contained in Volume IV of the series, Savannah: 1779 There is also an ad-hoc unit of British rear-echelon troops, British boatmen and pioneers, and new American militia. Generals Lincoln (Am.) and Phillips (Br.) are included.

There are rules governing American ammunition depletion and a record sheet is included. After a unit's 2nd round of combat it will be marked with an "Ammo Depletion" marker and will subsequently suffer a -1 modifier in Close Combat. Morgan's rifles (reduced when the scenario begins) will suffer depletion to rifle fire after their 3rd Rifle Fire phase.

The Gates-Arnold controversy is represented by the fact that Arnold may not leave his quarters in this scenario although he may still command units that stack with him there. No American sortie restrictions apply but the garrison rules remain in effect.

The British have exclusive movement on Turn-1 and have the initiative on Turn-2. Thereafter turns are random player order. The British begin with momentum.

A facelift to the counters. Correct British trim will be added to the regiments. The Prinz Ludwig dragoons, depicted as chasseurs in the 1st edition, will be given correct uniform specs. The German grenadiers and chasseurs, featured as replacement counters in Volume III "Guilford: The High Water Mark of the Southern Campaign" will be included. American units will also be shown in correct uniforms, including buckskins for Morgan's fabled riflemen.

A yellow star will be added to the Morgan unit depicting its status as a demi-leader. This is similar to the way demi-leaders are portrayed in "Savannah-1779." Morgan is also the beneficiary of a rule that states he no longer suffers a -1 modifier in Close Combat when stacked with Dearborn's light infantry.

Cavalry Withdrawal, featured in all the other game in the Series, will be added to the tactical options for the Connecticut Light Horse.

A full set of 8 Tactics Chits with flag symbols on the reverse sides will be included. Finally, the map will be redrawn to eliminate the ambiguities in certain hexes in terms of whether they are forest or clear.

The original Saratoga scenario will also be amended by the addition of the Middle Branch Ford Rule. "Starting on turn 8, the American player will subtract 1 from the Gates Release die roll during any turn in which the British Player does not control hex 1011. Control is defined as occupying or being the last to pass through with a Parade Order combat unit other than artillery, regardless of enemy zoc."

As you can see, the above are quite significant enhancements and additions to the original game, which is why we are remaking it as a complete 2nd Edition and not merely a reprint.
» Browse other products by GMT Games
Home Back to Results