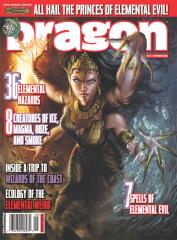 The Lords of Elemental Evil
by Kevin Baase and Eric Jansing
The Princes of Elemental Evil: Cryonax, Imix, Ogrémoch, Olhydra, and Yan C Bin are back and ready to freeze, burn, crush, drown, and blow your players away. Here is a sample, giving insight into the Evil Elemental Prince of Earth.

Ogrémoch
The Lord of Evil Earth Creatures, Ogrémoch lives atop a great mesa, high above a rocky plain on the Elemental Plane of Earth. This plateau, upon which his immense fortress Stonemire rests, is inside a vast, intensely hot cavern—a fact not readily apparent even when viewed from a distance. Some say Ogrémoch buried countless foes and challengers inside his mesa over the years, keeping some alive to tap into the power of their spirits. Ogrémoch spends little time at home, though, as he usually wanders the elemental Plane of Earth looking for creatures to bend to his will or destroy.

Rigidity marks Ogrémoch's personality. He is callously practical, industrious, and prudent. His dispassionate nature does not mask his evil, though, and all creatures of earth fear him. Although few claim to have actually encountered him, Ogrémoch's evil taint can be felt wherever he walks.

Ogrémoch's symbol is an equilateral triangle with short hash marks through each leg.

Paraelemental Paragons
by Eric Jansing
Monoliths of ice, magma, ooze, and smoke dwell in the boundaries between the planes, waiting with their lesser brood to storm your campaign world. The following sample encounters are just some of the possibilities.

Sample Encounters
Paraelement creatures fill roles similar to their Material Plane counterparts, roaming the lands between the elemental planes they inhabit. Encounters with these creatures become common as the borders between the planes draw close.

Squid Cave (EL 11): An old and particularly angry ice element giant squid dwells within a submerged cave in a titanic iceberg floating on the border between the Elemental Planes of Air and Water. The beast roams from its lair only occasionally but when it does so all of the nearby creatures, including a group of local merfolk, flee from its terrible wrath.

Lava Charger (EL 6): The fiery mountain passes are full of creatures belligerent to outsiders. The magma element rhinoceros is one such creature, and any who draw near it are likely to face its deadly charge.

Muck Tyrant (EL 10): The muck-filled caves and plains that make up the border between the Elemental Planes of Earth and Water are home to a wide variety of creatures. One such beast is known only as the Muck Tyrant, an ooze element behir that dominates a wide swath of territory and who allows passage only to those who pay it fealty.

Curious Wisp (EL 9): A smoke element dragonne prowls the region between the Elemental Planes of Air and Fire, curious about any creatures not native to the area. Those who pass underneath its endless patrols are likely to draw its attention, causing it to follow them a bit from above. If the characters attempt to communicate with the creature it gladly lands to chat with them. Should they ignore it, the creature grows angry and attacks.

Inner Planar Hazards
by Chad Dickow and Duncan Hanon
Everyone knows the plane of fire is not the safest place to travel, but few are prepared for the dangers lurking on the other elemental planes, including razorgrit storms, mineral mites, amber barnacles, and worse. Here is a sample from the elemental plane of fire.

Ash Willow
This willow tree has dark red bark and at full height can reach 120 feet tall. Ash willows thrive on heat and often grow in pools of lava, growing several feet a year and quickly dominating an area. Ash willows continually smolder and rain ash all around them, eventually creating a unique ashen landscape. One tree can create 1 pound of ash each day for every 10 feet of its height. Fast-growing roots extend runners that spawn 1d3 new trees each month. The trees spread within lava pools and along rivers of lava, often changing highly volatile areas into calm, slow-burning forests covered with ash.

Treat areas in which ash willows grow as areas filled with snow for purposes of visibility.

Plus!
Ecology of the Elemental Weird, Spells of Elemental Evil, Bazaar of the Bizarre, Class Acts, and comics—including The Order of the Stick.
» Browse other products by Paizo Publishing
Home Back to Results