#346 "Impiltur - The Forgotten Kingdom, Pelor - God of Healing and Light" 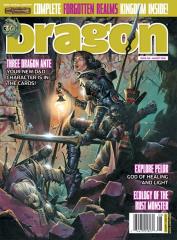 Core Beliefs: Pelor
by Sean K Reynolds
Bring Pelor's healing light to the darkest reaches of your campaign with this in depth look at the god of the sun. Here is a sample of the holy days from the third installment of this popular series.

Holidays
Pelor's church has dozens of minor holidays, mostly related to solar conjunctions and praising particularly sunny days. As the church is friendly with most other faiths, it often shares holiday services with other good temples, in particular Rao, a deity of peace. Two significant holidays of the faith follow.

Breadgiving Day: This holiday falls on the 4th of Needfest (a midwinter month). Originally an event to feed the refugees that came to the City of Greyhawk during the Greyhawk Wars, the holiday was changed after the war to be a day where Pelorian clerics (and those of other faiths, to a lesser extent) distribute small loaves of bread to the needy, who in turn form long lines for these handouts. The followers of St. Cuthbert and Rao also participate in this holiday, with Cuthbert's faithful providing security and preventing fighting. Pelor's temples hold a morning ceremony on this day with a sermon, singing, and music.

Midsummer's Day: The Pelorian celebrations on this day are so well-known and universally practiced that it is often referred to as the "Holy Day of Pelor." The clerics of his temples join together for a large religious service that lasts from dawn until noon, using weather-controlling magic to ensure sunlight for this period. The afternoon is reserved for a great feast open to all, for the sun gives his energy to all freely and so should the church. After the feast the clerics dress in yellow and gold and lead a procession through town, providing food and healing to whomever needs it. Those who need extra care, particularly children, are brought back to the temple and given additional attention. Some clerics solicit charity from the obviously wealthy people in their path, using guilt, tear-jerking anecdotes, or even sick orphans carried on litters to elicit larger donations. It is also important to note that both of Oerth's moons are full on this night, making it very difficult for lycanthropes to resist changing. As a result, some crusading members Pelor's faith take it upon themselves to hunt evil lycanthropes on this night.

Impiltur: The Forgotten Kingdom
by George Krashos
No kingdom sleeps quietly in the FORGOTTEN REALMS. Learn what heroism shaped this country's war-ravaged past, what plots threaten its current tenuous peace, and who guards its uncertain future. Here is just one of the threats facing this forgotten kingdom.

The Citadel of Conjurers
This dark and forbidding tower of black stone lies at the foothills of the Earthfast Mountains at the mouth of the Moaning Gorge, a place known for the peculiar sound the rushing wind makes when it blows through it. Constructed during the waning years of the empire of Narfell as a last bastion against the forces of Raumathar, it served as a site for summoning all manners of fiends to bolster the battle-strength of Narfell in the final days before the cataclysm known as the Great Conflagration ruined that tainted nation. The great demon prince Eltab first trod the soil of Faerûn at this site.

Sages believe many demonbinders of Narfell fled here after the fall of that realm and that the last Nentyarch of Narfell, Rheligaun "the Horned," retreated here as well, although his final fate remains a mystery. Many believe the Narfelli who fled here were hunted down and slain by vengeful Raumathari battlemages who sealed off sections of the tower and the labyrinth of chambers and catacombs beneath it. Over the many years since the fall of Narfell, some of Impiltur's greatest heroes—including King Sarshel "the True" and his great-grandson King Nord—walked its gloomy halls and returned to tell the tale, confirming that entry to this citadel is not prohibited or prevented.

Three Dragon Readings
by Craig Shackleton
Cast the fate of your character with this innovative system using the Three Dragon Ante deck.

Games of Chance
by Seth Irvin Williams
New card and dice games for you and your character, including "Rat, Bug, Spider" and "Wyrm Poker". Here is a sample game from the article.

The goal of this game is to gather as much treasure as possible. To gather treasure, a player must first get an Adventurer, a Map, and a Chest. For the purposes of this game, a 6 represents an Adventurer, a 5 represents the Map, and a 4 represents the Chest. Each player individually rolls six six-sided dice, up to three times. After each toss, the player can elect to set aside any number of his dice before throwing again. The player cannot keep a 5 in this way until a 6 is kept, and cannot keep a 4 until a 5 is kept. Once the player has an Adventurer, Map, and Chest, the three remaining dice equal the amount of treasure found. With the player's remaining tosses, he can attempt to make this number as large as possible, but each time, he must throw all three remaining dice. The winner of the game is the player with the most treasure. If no one has treasure, the game is won by the player who has the most required rolls, so a player with a 6 and a 5 beats players who only have a 6. If no one manages to get an Adventurer, a Map, or a Chest, all players ante again and play another round. The pot is split in case of ties.

Plus!
The Ecology of the Rust Monster, Bazaar of the Bizarre, Class Acts, and comics, including The Order of the Stick.
» Browse other products by Paizo Publishing
Home Back to Results