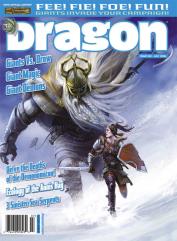 Demonomicon of Iggwilv: Kostchtchie
by James Jacobs
Discover a rage powerful enough to bow even the heads of giants: Kostchtchie, Prince of Wrath. Learn about the cults, minions, and terrible creatures that serve his anger.

Kostchtchie's Cult
Kostchtchie's cult consists primarily of tribes of frost giants, although it's not unusual to see tribes of humanoid or ogre barbarians venerating him as well. Worship of Kostchtchie consumes an entire tribe, leaving no room for alternative beliefs—such heretics are rooted out and slaughtered as quickly as they can be discovered. Kostchtchie himself (and by extension his frost giant cultists) tends to view his humanoid and ogre followers as little more than tools or slaves. There's little room for diplomacy or subtlety in the teachings of the Prince of Wrath. His cultists lay claim to vast territories, dominating all neighboring tribes and putting those who don't pledge their souls to Kostchtchie to the axe.

The Giants of Xen'drik
by Jason Bulmahn and Amber Scott
Savage drow and stone-hearted giants war in the depths of Eberron's dark continent. A glimpse of the upcoming release, Secrets of Xen'drik. Takes sides in the conflict and learn the secrets behind their endless war. Here is a sample of one of the weapons used by the drow.

Giant-Tooth Arrow
The drow take teeth from their fallen enemies to craft these blunt-tipped arrows. Sszaral, the drow chieftain, made his arrows from teeth of the sacred skulls. Designed to help them combat giants, the drow do not hesitate to fire these arrows at any intruder, giant or not, who enters their vale.

Description: This black-shafted arrow possesses a wedge-shaped ivory tip. Dark red sinew binds the arrowhead to the shaft.
Activation: Firing a giant-tooth arrow is sufficient to activate its magic properties.
Effect: A giant-tooth arrow functions as a +2 giant bane arrow. In addition, whenever the arrow deals damage to a target, the arrowhead burrows beneath the target's flesh. The target receives a 2 penalty on attack rolls, Reflex saves, and Concentration checks while the arrow remains lodged in her flesh. The target can take a standard action to remove the arrow. The burrowing property does not affect constructs, oozes, or undead.
Aura/Caster Level: Moderate conjuration and necromancy; CL 9th.
Construction: Craft Magic Arms and Armor, bestow curse, summon monster I, 327 gp, 26 XP, 1 day.
Weight: —
Price: 647 gp per arrow.

Excursion
by Martin Ralya
Leave your horse behind and travel the world by ship, caravan, submersible, or even airship. Four transports, fully detailed including a map, adventure hooks, and information about the captain and crew. The following sample is from the Kraken's Bane, a mysterious submersible.

Kraken's Bane
The crew of the Kraken's Bane is a grim lot, cowed by the formidable shadow of Captain Zagiir. Two new crewmen and two veterans man the ship with tireless precision, as the captain has no patience for incompetence. The crew willingly tolerates Zagiir's turbulent temper, though, as each is exceptionally well paid. Questions such as where this gold comes from and what happened to the ship's former crewmembers remain unanswered—or at least, anyone in the know proves unwilling to speak of such things.

Sea Serpents
by Morgan Peer and Tracey Peer
Three new dragons of the briny depths, including the crested, lantern, and spiked sea serpent.

Ecology of the Annis Hag
Delve into the secrets of these dark crones. The following text got cut from the article, but is presented here to give you a vile taste of what is to come.

Powers of the Covey: Hag Brews
As much a part of hag mythology as cruel coveys and grotesque hag eyes are these creatures' terrible cauldrons and the foul concoctions that bubble and writhe within. Part dark ritual, part cannibalistic feast, what screams and ferments within these grotesque pools is more than just mad alchemy, but a form of magical creation only hags are depraved enough to exploit. The corrupt hag brews that spill forth from these crones' cauldrons can wreak powerful magical effects, but often do so at a terrible price.

Formulating a hag brew is a process much like creating a hag eye. Instead of creating such a gem, a covey that meets the proper requirements (noted with each individual brew) can produce one hag brew per month on the night of the full moon. Every hag brew requires the sacrifice of a sentient creature, a number of other grotesque ingredients, and a 2-hour-long ritual taking place in the hours before and after midnight. The hags creating the brew must remain within 10 feet of each other and can perform no other action for the duration of the rite. Leaving the area or being distracted from the ceremony ruins the brew, the creation of which cannot be attempted for another month. A covey also cannot use its covey-related spell-like abilities the day after creating a brew, as this magic is expended by the brew's creation. Coveys that create hag brews cannot create hag eyes in the same month.

Brew of the Beloved
Brewed with the hair of a dozen beautiful maidens and bits of the warty scalps of each of the mixture's creators, this concoction is quickly bottled into a large jar upon its completion. It is not meant for consumption.

A jar full of brew of the beloved can either be uncorked or tossed as a thrown weapon with a range increment of 5 feet. Once opened, the brew begins steaming, quickly filling a 20-foot radius with a cloud of sickeningly sweet vapor. Any creature that breathes this gas must make a DC 16 Will save or be affected as by the spell charm monster, as if cast by all three of the brew's creators. This vapor fills the area for 1 minute, although a moderate or strong wind dissipates it in 1 round.

The hags who created the brew must be present to give their enchanted minions commands, as normal. As all three covey members can issue orders, a charmed creature follows the command most recently given to it. If a charmed creature receives multiple orders from different sources in the same round it does nothing.

Hags are immune to the effects of brew of the beloved.

Moderate enchantment; a covey with at least one green hag member; Weight 5 lb.

Brew of Cegilune's Blessing
Concocted using a blood-stained idol of Cegilune and ample portions of each of its creators' warty flesh, any evil creature that ingests this noxious mix temporarily gains the fiendish template. The drinker gains the benefit of the brew for 1 week, after which his Constitution is permanently reduced by 2. This Constitution reduction cannot be restored by any spell short of a wish or miracle.

If a good-aligned creature drinks this brew, he must make a DC 17 Fortitude saving throw or be rendered unconscious for 1d4 hours and take 1d4 points of Constitution damage. This ability damage can be restored as normal. If the drinker makes his save he suffers no ill effect.

Moderate transmutation; a covey with at least one worshiper of Cegilune; Weight —.

Spellcraft, Bazaar of the Bizarre, Class Acts, Sage Advice, comics, and more.
» Browse other products by Paizo Publishing
Home Back to Results