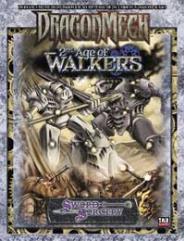 An age of destruction paved the way for the Second Age of Walkers. Life in DragonMech depends on the gigantic mechanized walkers that provide safety, shelter, and transportation. Behold a world reshaped by the mech!

This hardcover campaign sourcebook offers the first detailed look at the world of DragonMech. Learn about the autocratic Stenian Confederacy, the mysterious Irontooth Clans, the ambitious Legion, and the ephemeral L'arile Nation, including new feats, mechs, and classes that allow you to personalize characters from those factions. Along the way, find your own answers to the mysteries of the Gearwrights Guild: Was there really a First Age of Walkers before the dawn of magic?

Designed for use with DragonMech, Second Age of Walkers includes:

* A comprehensive look at the four major factions shaping the world of DragonMech, including maps of their territory, descriptions of major personalities, and gazetteers of three important city-mechs: Durgan-lok, the first city-mech ever built; Haven, the human city-mech that threatens dwarven dominance; and Tannanliel, the reclusive magic-fueled city-mech of the elves

* Everything a GM needs to shape adventures around the major themes of each faction: the Stenian military, the itinerant human tribes that now make up the Legion, the myriad individual clans of the Irontooth, of which 10 are examined in detail; and the strange magical secrets of the elves and their well-protected forests Stats for dozens of important NPCs, including Shar Thizdic, Tannan, and the most notorious of the Irontooth raiders

* Everything a player need to build characters from each of the major factions, including 5 new prestige classes, a new core class variant, and 49 new feats, organized according to the faction in which they originate 56 new spells, including the magic used by the Irontooth to steal spirits and bind them to mechs, the agricultural magic of the Legion tribes, and the mech-augmenting spells of the elves

* And more: rules and background for mechanical sculpture; details on the inner workings of the Gearwrights Guild; background on the dwarven clans; rules for spirit-powered mechs and the shintaji spirit-stealers of the Irontooth; new equipment; 13 new mechs (not counting the city-mechs); and more!
» Browse other products by Sword & Sorcery Studios
Home Back to Results