Blood on the Hills - The Canadian Army in the Korean War 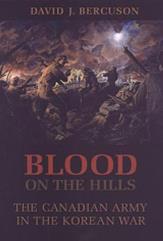 The Korean War represented a series of firsts for Canadian soldiers - their first military action under UN auspices, their first under U.S. corps and army command, their first in Asia as ground troops, and their first in which people at home initially ignored their efforts, and then forgot about them. David Bercuson evokes the tastes and smells, the frustrations, the unfamiliar terrain, the international complexities, and the heroism that made the Korean War an unforgettable experience for those who fought there.

Caught by surprise with only a phantom army, the Canadian government in the summer of 1950 was forced by its major allies to promise a ground combat contribution to the UN effort to push back the Communist invasion of South Korea from the north. The Canadian Army Special Force, as the Korean contingent was first called, was hurriedly raised, trained, and sent to Korea, ill-prepared for a mountain war against a determined, well-armed enemy. Canadian soldiers fought bravely, often against impossible odds, to carry out their mission, but they were hindered by several factors - cautious UN Command strategy, poor British and Canadian defense doctrine, uneven leadership, and inadequate equipment and training. They did their duty, and more, in stopping Communist aggression in its tracks, but the Canadian army chose not to remember the lessons of Korea, even though that conflict, as a limited war, set the pattern for virtually all those that followed.

Blood on the Hills is the first full, non-official history of the Canadian army's operations in the Korean War. The book covers the period from the start of that war to the cease-fire in July 1953 and describes and analyses the mobilization of the Canadian contingent, its training, manning, and equipment, and its efforts in combat. David Bercuson focuses on the many consequences of the army's unreadiness for combat in Korea and on the army's lack of success in learning lessons from its experience in an active theatre of war
» Browse other products by University of Toronto Press
Home Back to Results