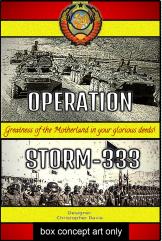 
NOTE: This product is a Pre-Order and is not currently available. The estimated release date is TBD 2020 (subject to change).
MAX 2 per customer. Orders containing preorder products will be held until all preorder products on the order have arrived in our warehouse.
Operation Storm - 333
by Compass Games
Category: War Games
Sub Category: Popular War Games
Genre: War Game - Modern (1960 A.D. to Present)

By the 1950s, Afghanistan had experienced several decades of modernization and relative peace. The reforms of King Mohammed Zahir Shah included a constitution, universal suffrage, women's rights, and a parliament. However, internal factionalism and Cold War competition would ultimately destroy the peace he had constructed. A coup in 1973 by the King's cousin, Mohammad Daoud Khan, invited conflict with the country's communists who, in turn, toppled and killed Khan in 1978. The communist Saur Revolution led to many repressions against political enemies, including tribal and religious leaders, intellectuals, and other communists. By mid-1979, many parts of the country were in open revolt. The rapidly growing instability of Afghanistan concerned the Soviet government. The Soviet Union invaded the country in December, 1979. At the spearhead of this invasion, special purpose forces of the Committee for State Security (KGB), the Main Intelligence Directorate (GRU), and the Soviet Airborne Forces (VDV), seized key buildings in the Afghan capital and killed and captured senior officials of the Afghan government. Operation Storm-333 marked the descent of Afghanistan into a new, dark chapter.

The game is played in two phases: the Planning Phase and the Execution Phase. During the Planning Phase, the player manages the support of the Soviet power ministries (the KGB, the GRU, the General Staff, and the Politburo), assigns Key Leaders and military units to specific Targets, and conducts intelligence operations, training, and special missions to shape the operation. The player must also manage random events that may detrimentally impact the operation as well as guard against the Afghan government's own alarm about a potential invasion. During the Execution Phase, the player completes each tactical mission in player-choice order on point-to-point maps.

Operation Storm-333 places the player at the center of a special purpose operation that is held in high regard by Soviet & Russian histories, but also triggered the many decades of despair experienced by the people of Afghanistan. Although the mission was an overall tactical success, the campaign it served would ultimately lead to the dissolution of the Soviet Union, the rise of the Taliban, and the September 11, 2001 attacks. Few events in history stand so clearly at a nexus of many possible futures.