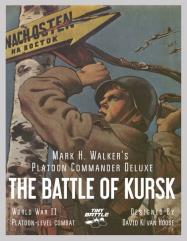 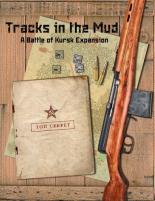 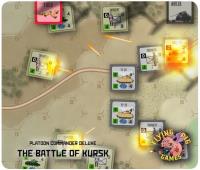 In this Bundle you get the following!

Kursk. Many historians believe it was the turning point of World War II. Kursk. Witness to the largest tank battle of the entire war. Kursk. The end of the myth of German invincibility. Kursk. Just one hell of a lot of fun to game with 1” square cardboard counters representing platoons of infantry and tanks and batteries of anti-tank guns, mortars, and stuff. And that is what you get with Platoon Commander Deluxe: Kursk.

Tracks in the Mud is a boxed expansion for Platoon Commander Deluxe: Kursk. The expansion includes a new sheet of die-cut counters, including Jagdtigers, King Tigers, Jagdpanthers, T-34/85, and IS-3, to name but a few. There is also a new, 22" x 17" mounted mapboard, and several new scenarios, all packaged in an attractive box.

Better still, two of the included late-war scenarios pit the Americans against the Soviets in the interesting, what-if scenario that Patton Imagined. What if we had continued the war into Russia? These scenarios utilize American counters for Pershings, Easy-Eight Shermans, and infantry.

» Browse other products by Flying Pig Games
Home Back to Results