#78 "The Modern Necromancer, City of Khemennu - Part 2, The Aftermath of I Am Legion" 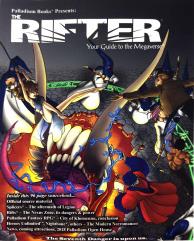 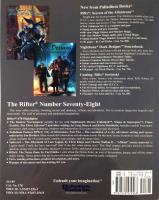 This issue offers mystery, festering secrets and darkness, villains and adventure. Not to mention dangerous magicks and immortality. The stuff of adventure and unchained imagination.

Every issue of The Rifter is an idea factory for players and Game Masters to generate new ideas and find new avenues of adventure. It provides useful, ready-to-go source material you can just drop into your ongoing games. A doorway to new possibilities and numerous Palladium role-playing worlds. And the many new characters, O.C.C.s, powers, magic, weapons, villains, monsters, adventures and ideas for one setting can be easily adapted to any Palladium setting. Every issue has material for Rifts and usually 2-3 other Palladium game lines. The focus of this issue is Palladium Fantasy, Rifts and Splicers. Don’t forget, unofficial material can be easily adapted for use in ANY Palladium game setting.

» Browse other products by Palladium
Home Back to Results