Return to Sender/Down and Out in the Barrens (Shadowrun/Battletech, Free RPG Day 2015) 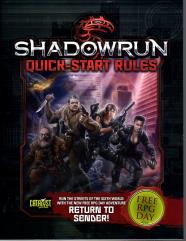 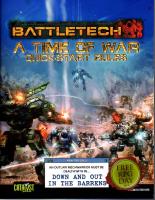 Irkvin Borlt is an ork on the make, a vice-president-level executive at Venus Microsystems, an A-level tech corp based in Seattle. Six months ago he hired some shadowrunners to extract and add to his team an executive named Fife Drummond from their rival Microdeck. Drummond had a reputation as a dynamic problem-solver, in what he thought would be a considerable coup that would raise his profile within the corp. The run went off six months ago without a hitch. Drummond became a Venus employee.

Unfortunately, Borlt’s due diligence was inadequate. Had he asked around more carefully, he would have found out that Drummond was a stuffed shirt; a thick-skinned martinet who was only effective because his subordinates completely ignored him (they were actually quite happy to see him gone, and made sure Microdeck didn’t make any waves about the extraction). Suddenly Borlt had an executive who had no idea how to manage anything dragging down the morale of everyone on his team, the performance of his division was struggling, and his fellow VP-level execs was starting to notice. Borlt has to get Drummond out as soon as possible, but he spent a lot of money and staked his reputation on bringing Drummond in, so he can’t just admit it was a mistake, fire Drummond, and move on. He has to get Drummond out in a way that looks like it was not connected to him and keeps Drummond away. He figures if he deposits Drummond back at Microdeck they’ll receive him with open arms…that’s where you come in, chummer.


Down and Out in the Barrens

The universe is at war. Even though mankind has reached out to command the stars, the human lust for conflict and conquest could not be overcome as easily as the distance of light years.

The people of Black Canyon County on Botany Bay have a persistent pirate problem, one that only a team of trained warriors can deal with. The trouble is, they didn't have any until Dropship troubles stranded you on this planet. Your last disastrous mission left you deprived of your equipment, and the few of you who remain are lucky to be alive. On top of that, you've spent about the last of your money hitching your last ride to this icy volcanic dust ball, so the promise of employment - even in a forgotten corner of the periphery - is more than you can afford to pass up.

The Governor of this corner of Botany Bay says that, as far as anyone knows, there is only one raider 'mech out there, commanded by a pirate woman. She was left behind by the rest of her cohorts after their lsat major pirate raid against botany bay, and ever since has appeared only to raid communities throughout the area for food, equipment, and occasionally money and other valuables.

Nobody knows why the other pirates abandoned their cohort, and frankly they don't care. The fact remains that she has a heavy Battlemech, and the county's security forces simply can't handle that kind of firepower. Fortunately, there remains some military gear left here from the clan occupation including a single functional 'mech, a couple of battlesuits, and a few vehicles that the bandit has yet to destroy. The only trouble is that nobody around here has the skillset to use that gear until you came along.

Must be fate!
» Browse other products by Catalyst Game Labs
Home Back to Results