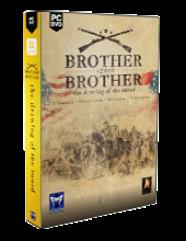 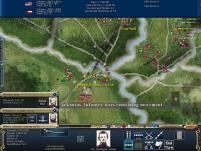 “Brother against Brother” is a turn-based series of games which simulate the battles of the American Civil War at the regimental level.

The first release, “Brother against Brother: The Drawing of the Sword,” is devoted to the opening battles of the war: the first major battles of 1861 in both the eastern and western theaters, 1st Bull Run and Wilson’s Creek, as well as the first battles of 1862, Mill Springs and Williamsburg.

“Brother against Brother” boasts scrupulous attention to detail in the preparation of maps and orders of battles; Western Civilization Software did years of primary research, pouring over national archives, consulting with a dozen experts, and exploring every inch of the actual battlefields.

The maps themselves are vast, some as large as 50 square miles, and at 75 yards per hex are rendered in intricate detail.

The game engine presents the player with a novel system of movement and issuing orders that emphasize the difficulties of wielding command-and-control over Civil War era regiments.

The units themselves are accurately simulated not only in their strength and level of training, but also in such details as their sub-commanders and weapons. Many units have special qualities in the game that represent the qualities which made them famous during the war, and some units have special attachments like Zouaves or sharpshooters. The engine models hundreds of details with an easy-to-grasp user-interface: weather, formation, supply, skirmishers, brigade orders, dismounted cavalry, division activation, corps intelligence... even battlefield smoke.

Providing a wide range of historical and alternative-history scenarios, “Brother against Brother” lets players refight the major battles of the Civil War at an unprecedented level of depth and detail.