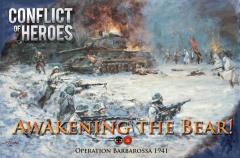 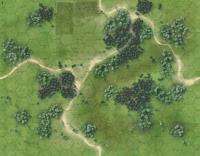 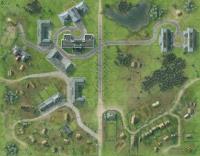 The year is 1941. Germany has defeated Poland, Denmark, Norway, and France with ease. In the morning hours of June 22 over 3 million German soldiers attacked Soviet forces along a 1600 kilometer front heralding the beginning of Operation Barbarossa. Complete surprise was achieved and the Germans struck deep into Soviet territory. The Germans thought that the Soviets would fold like a house of cards. Their officer cadre had been massacred by Stalin, training was poor, and morale low. The Blitzkrieg catches the Soviets by surprise and they lose over 1.75 million men in the first two months alone.

The Germans are unstoppable, their Panzers pushing to the very gates of Moscow. But then winter hit and the cold drained the German’s resources, strength, and morale. The Soviets began striking back in the dead of winter and the momentum began to shift in their favor through the following spring. The bear had awoken!

Awakening the Bear! - Russia 1941-42 takes you to the eastern front during Operation Barbarossa, the German invasion of Russia. Many consider this time period to be the birth of modern warfare tactics that continue to be used and perfected by today's modern armies.

Much effort went into distinguishing the units in the game by highlighting their historical strengths and weaknesses. For example, each tank defense rating takes into account relative armor thickness, armor slope deflection percentage, speed, size, targeting mechanics, and crew training. All these factors are represented in an easy to learn target number system.

The included firefights, most of which you can play in about an hour, are designed to depict the pivotal points in a given battle. You can learn enough of the game to play the first scenario in 10 minutes thanks to the programmed instruction approach used in the full-color rulebook.

The game also features 3 to 4 multi-player firefights and optional rules for solitaire play.

» Browse other products by Academy Games
Home Back to Results