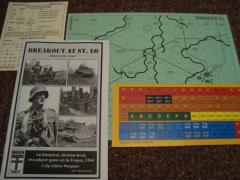 Breakout at St. Lo is a two-player wargame simulating the fighting in the bocage of France that took place between July 27-30, 1944, between American and German forces, near the area of St. Lo, at the start of Operation Cobra. This game is in the "Battles for France" series that is being published by Minden. The object of the game for the Americans is to initiate a breakthrough all along the line, and for the Germans, to prevent this.

The Americans are on the offensive, and gain Victory Points for exiting units off the map, and eliminating German units. However, the number of VP gained by exiting cannot exceed the number of VP gained by eliminating units. The American player must therefore strike a balance between these two goals; a miscalculation here could prove decisive. For the Germans, they must decide on deploying forward to attempt to delay Americans (and probably lose more troops), and withdrawing (and risk giving up ground too quickly). The game therefore gives both players strategic options that are different, but equally tricky.

With high playability, low counter density, many optional rules, and rich strategic choices for both sides, Breakout at St. Lo provides players with a World War II game that plays quickly, and rewards sound tactics.
» Browse other products by Minden Games
Home Back to Results