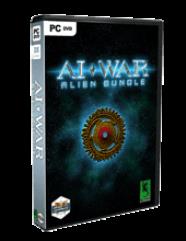 "You are outgunned. You are massively outnumbered. You must win." These are your orders.

Humanity has already fought its war against the machines -- and lost. AI death squads stand watch over every planet and every wormhole, the few remaining human settlements are held captive in orbiting bubbles, and the AIs have turned their attention outward, away from the galaxy, to alien threats or opportunities unknown. This inattention is our only hope: a small resistance, too insignificant even to be noticed by the AI central command, has survived. These are the forces you will command!

This is AI War: Alien Bundle, a one-of-a-kind strategy game that plays like an RTS but feels like a 4X, with tower defense and grand strategy bits, too. With limitless replayability, dozens of ship types, and massive battles, AI War: Alien Bundle allows you to test your wits against cunning and unique AI opponents either solo or with up to 8 players in cooperative mode. AI War: Alien Bundle is extremely configurable, so you can set it up to have a slower, more thoughtful, 4X feel, or you can make everything happen blazing fast so that your reflexes are tested. Whether you’re a hardcore wargamer, an RTS addict, 4X lover, or something in between – AI War: Alien Bundle will bring countless hours of space strategy!